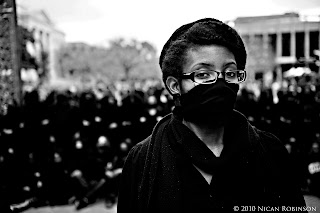 Currently, I am in a camera blackout... but there was a much more significant "blackout" this week. Blackout 2010.

On facebook popped up a photo taken by my buddy Nican Robinson. It was so moving, that despite not wanting to get too political on my blog, I just had to post. A lot of news outlets which covered the event, made it look like your typical directionless extremist protest (like the random guy who sat in a tree near Wheeler last year) or the other end, a boring group photo of people dressed in black. Nican really captured this, I thought it was such a powerful photo, and important issue, that I wanted to share.

This is from Blackout 2010 where over 200 African American students gathered at Sather Gate in Berkeley, dressed in black with black tape across their mouths: "Listen to the silence - Blackout 2010... We are brothers and sisters in a nonviolent, silent demonstration, standing in SOLIDARITY with the UCSD student who have been affected by blatant acts of ignorance and hatred... The UC Berkeley Black community stands here silent. Silent because we fear for the future. Silent because the past is prologue. Silent because there is nothing left to say. Our silence then, is your opportunity to act."
at March 05, 2010
Labels: Personal