*Had to wait for the story to come out before I could post this, hope you understand and enjoy =) 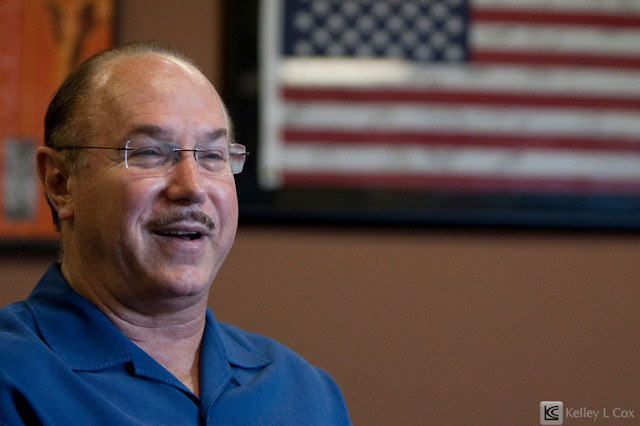 Last week received a call from a writer from an Italian newspaper, La Gazetta dello Sport after being recommended by my friend, writer Elliott Almond, thanks Elliott! The writer for La Gazetta dello Sport Massimo, was looking for a photographer to cover two stories on Tuesday and Wednesday (check out Wednesday's story here). He told me Tuesday would be at Victor -somethings- office a half hour south of San Francisco. Massimo has an Italian accent and I couldn't quite catch the last name, but I figured, some time to photograph while he's being interviewed, some time to photograph afterwards, wouldn't be too difficult, could figure out the detail of the last name later. 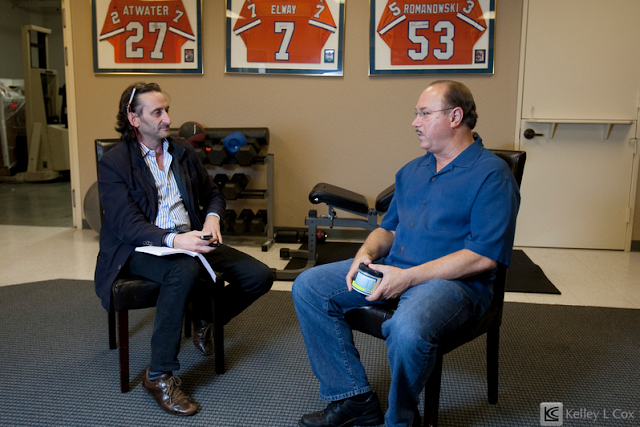 Tuesday morning, confirm the location with Massimo and learn that it's Victor Conte. Perhaps known as a member of the band Tower of Power, likely more well known as the founder of BALCO, and serving prison time for providing steroids to athletes including Marion Jones, Barry Bonds and Bill Romanowski. Suddenly this changed from covering a guy who somehow is involved with sports. To "oh man, I'm covering a guy who was part of sports largest scandal!" 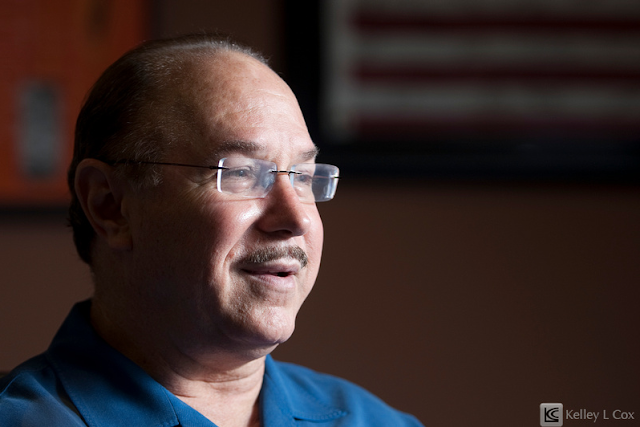 We arrived at the SNAC - Scientific Nutrition for Advanced Conditioning - his new and already successful nutritional supplement brand. There were happy Halloween decorations greeting us, and I knew it was going to be a good day ;-) 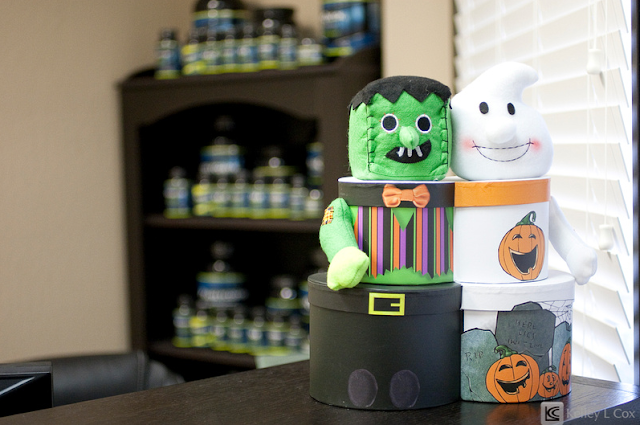 Victor introduced himself and was friendly and basically a photographer's best friend, ready to change his shirt, move around chairs, to make sure I had a set up I liked, turning on extra lights, even offering his own light set he had bought for when he does on camera video interviews, he is certainly not camera shy. His office isn't quite photographer friendly with numerous glass framed jerseys, posters signed by some of the biggest names in sports, ads for his products, and interior windows just dying to make reflections that mess up my photos. 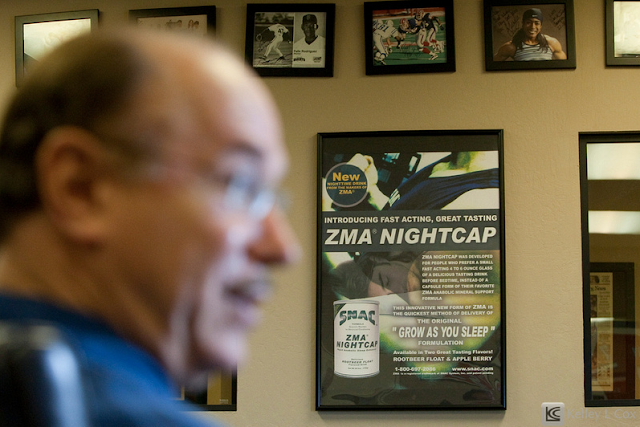 He sits down, starts talking about his new, not yet on the market, powder drink. 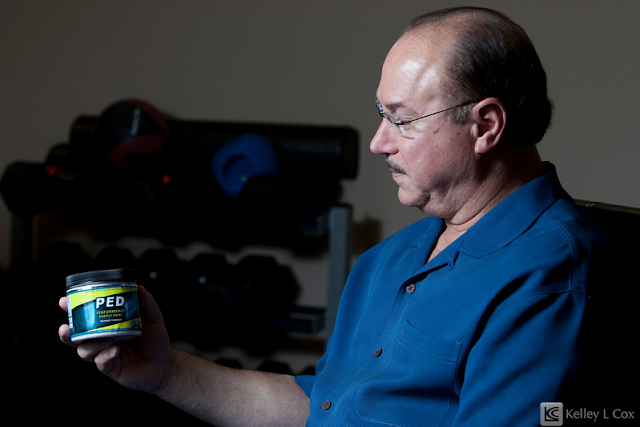 He then calls his daughter/employee Veronica, to bring us some. In walks Veronica, with two plastic cups full of mysterious pink liquid. Massimo takes a sip from his, and of course I don't want to be rude, so I take a sip. Thinking to myself, it's not every day you can say you drank unmarked liquid from someone who's a convicted felon for providing illegal steroids, I'm sure it's all B-vitamins or something and not full of steroids and my Olympics dreams are long gone anyways so why not! I'm disappointed that after working out back at home, I didn't gain 20lbs of muscle instantly, but I will say, it tasted like pink lemonade and was actually pretty tasty. Guess it's a good thing we weren't doing a story on a cocaine dealer... then I might have opted out on a sample of their new line. haha. 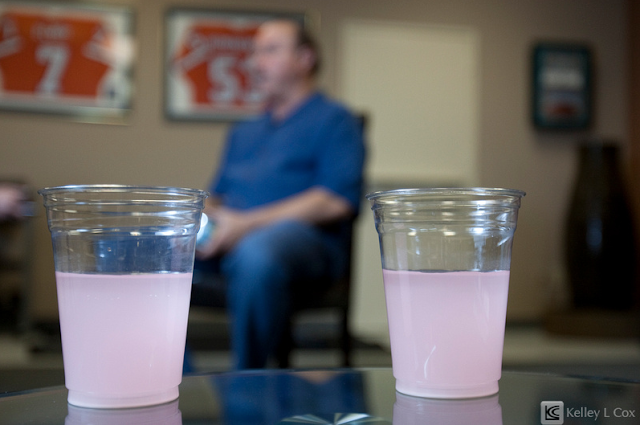 I thought he was going to give Massimo about an hour of time, and me just a few minutes for one posed shot, so I overshot the interview. He ended up talking to Massimo for hours. So much that in the middle of the interview I politely asked them if they would switch chairs because I had exhausted every possible angle and lighting situation. 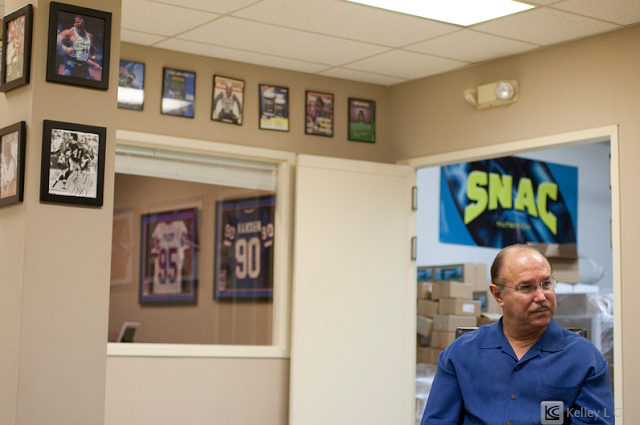 After the interview portion, well after 5 oclock and the entire staff has left. He granted me four different posed shots. One in front a USA track jacket holding his photo of Marion Jones. 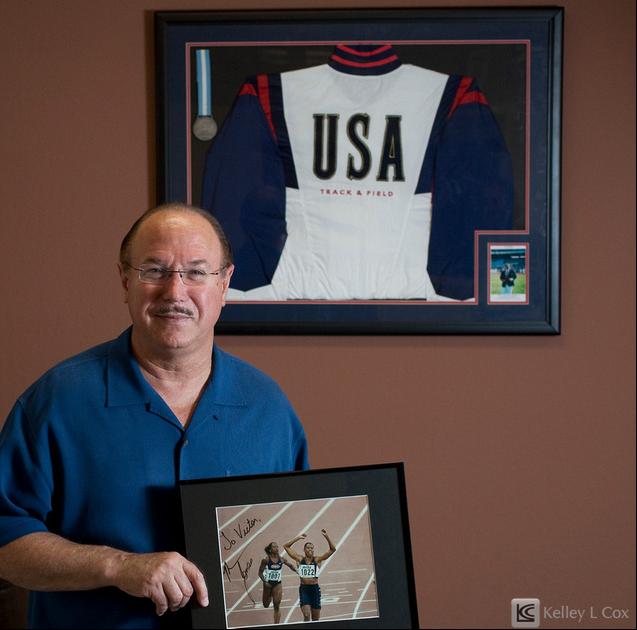 Another in the warehouse amongst all the supplements. 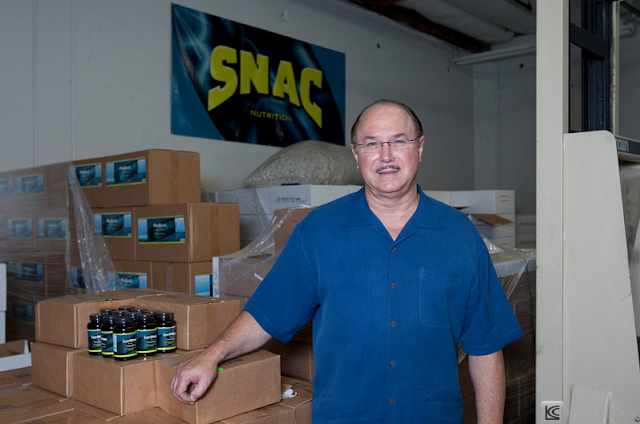 Another in front of the building with the SNAC sign. 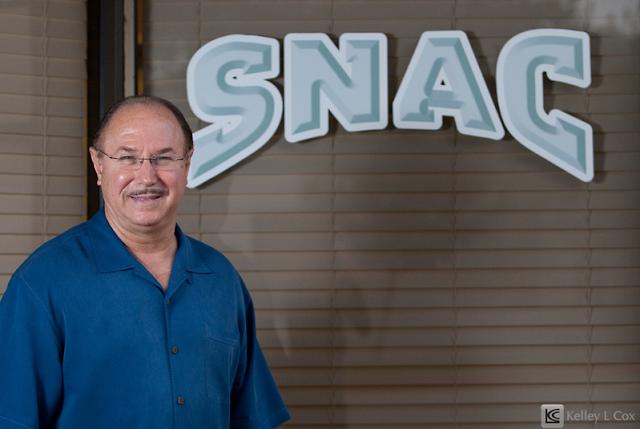 And lastly in his office. 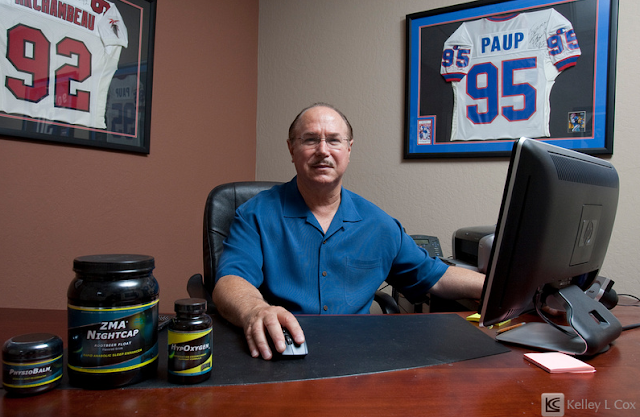 I'm sure steroid use is even more rampant than we are aware of, and who's to blame? The creator, the provider, the athlete, the agent, the team, society? As with many the problem is much larger than one party involved. I'm impressed with Victor Conte, he still has the trust of many athletes, earned the trust of some new athletes and is back in full force! 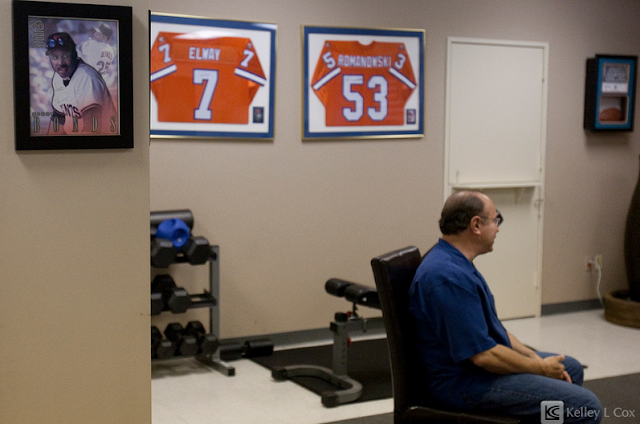 Was great working with Massimo and photographing Victor and looking forward to tomorrow's story!
at October 04, 2011
Labels: KelleyLCox.com, Portrait