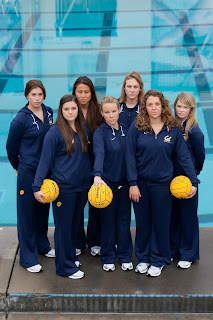 Yesterday I received a call to see if I could shoot Cal Women's Water Polo team photo and head shots. Despite being last minute, worked out perfect because I was also going to shoot Rugby team photo this afternoon. 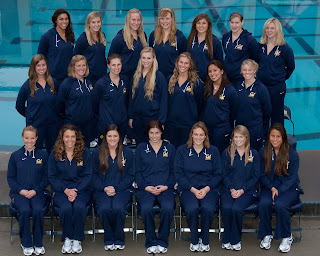 But with the rain approaching, rugby wisely decided to reschedule. The Women's Water Polo SID (Sports Information Director) decided WWP would shoot anyways. I called this morning after seeing the forecast predicting rain from 11am on, and the sky was looming above. Still the SID thought we could shoot in the team meeting room if was raining. For me, this is a nightmare, instead of a beautiful shot by a pool, I'd be in a closet with poor artificial light. 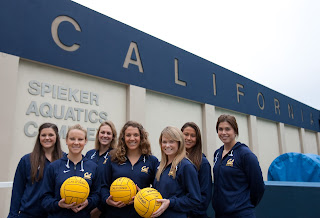 I had to think on the fly... Thankfully the room was a littler more decent than I had anticipated with nice California banners to match. I decided to start shooting outside to hopefully get the team photo done before the rain. I set up with my 530EXII (a flash as opposed to a strobe) so I could be a little more mobile. Turns out, I need to work with it more because it was not performing as desired. Luckily I had brought my strobes as well. The only problem was, the sync cord wasn't working. So I popped the flash on my camera, pointed it at the strobe so the strobe would fire as a slave off the flash. Got it? haha. 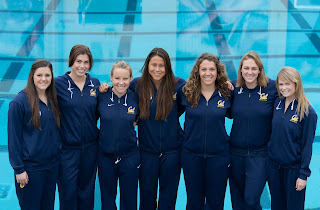 I also got lucky because it never rained and I got to shoot team photo, head shots, and senior photos all outdoors. The girls were great to work with, hope they have a great season!! 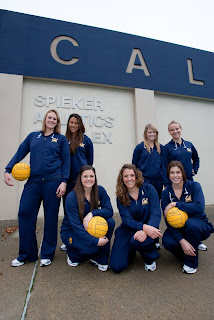 Thankfully, I brought my laptop with me because I got a call from my boss that he needed images put up on ISI and was out of his office. I am no longer working as editor for ISI but I'm glad he knows he can still call on me. I decided to spare the cost of buying something at a cafe, and just headed into the EMPTY library on campus for wifi. Images were from a great photographer, Howard Curtis Smith from the USA Bid Committee Announcement of the 18 cities they would present in the bid for 2018 and 2022 FIFA World Cup... San Francisco wasn't included =(

Then I roamed around the campus afterwards to take advantage of an overcast day. Too tired to add images, maybe I will tomorrow.
at January 12, 2010
Labels: Cal Bears, GoldenBearSports, NCAA, Water Polo