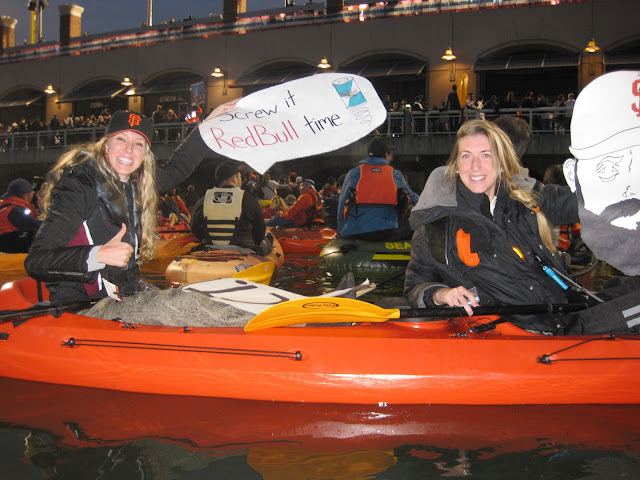 The start of my birthday weeks kicked off with a BLAST! Here's some photos taken by me, KC, my mom, and other kayakers. KC and I had it all planned out, it obviously didn't go as planned, but turned out even better than we could have hoped! 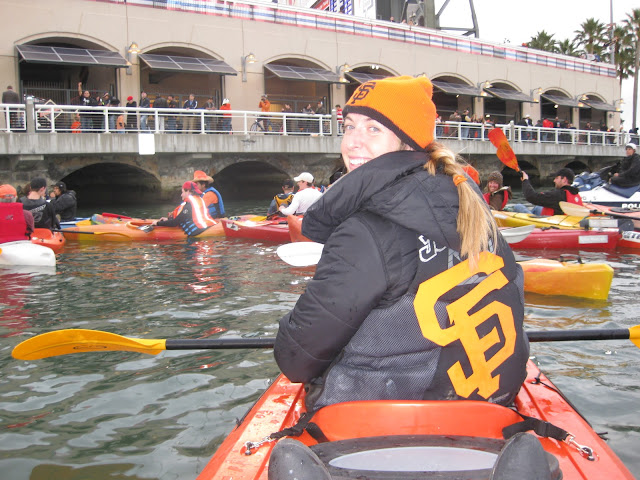 We had done some research on where to park, where to launch, how to get there, working with coast guard. Thankfully we had my mom to drive us and my mom and dad to pick us up! We planned to leave Berkeley at 3 but my photo shoot ran late and we didn't leave until after 3:30. Yet somehow there was NO traffic getting into the city. We avoided King St, took 8th out to Mission Bay and found the public boat ramp. There was 2 hr parking right in front of the ramp! 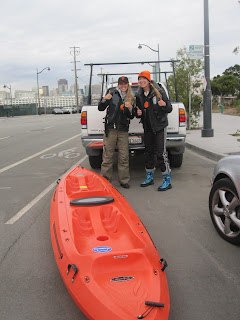 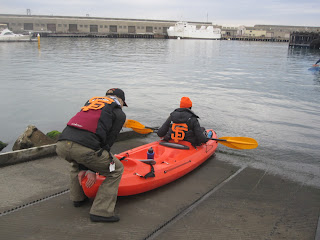 So we loaded up, packed up with our twelve layers of clothes (mainly snowboard gear) paddles, food and water rations, flashlight, radio, emergency whistle, glow sticks, and of course our posters. 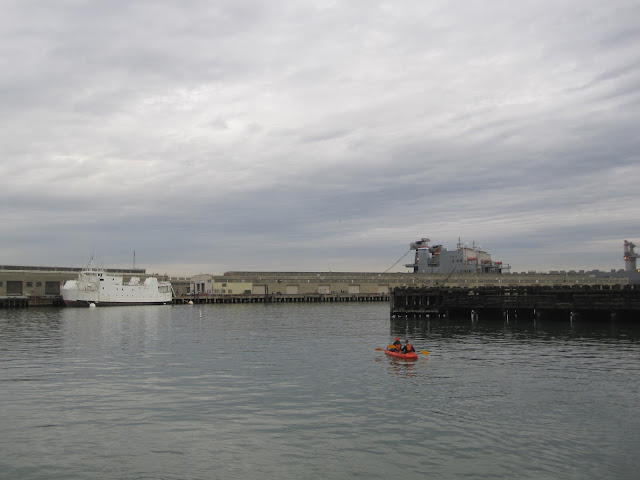 We launched from the pier and had to paddle past the GIANT military ships. We got around the dock no problem, curved around the first vessel, but then we caught the wake of a boat that was speeding by and it not only dumped water all over KC but also pushed us into the second ship. The current was ripping around the second ship and pushed us backwards in between the ships, and we were trying to paddle out before we slipped farther back and into the 3ft wide gap between them and got stranded there. We were paddling like crazy, and KC goes to throw the posters from her lap overboard in this hardcore moment of "WE GOTTA TOSS THE POSTERS!" I go "NOOOO, we can't lose the posters!!" and I took them, then we paddled like maniacs and finally escaped what seemed like near death at the time, got back on track and had a good laugh of "what in the world just happened?!" 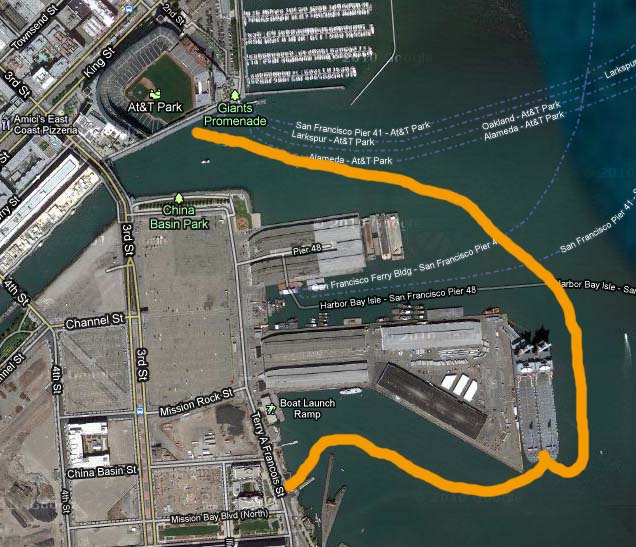 Then we made it to McCovey Cove! Coast Guard, SF Police, SF Fire Department and Oakland Police were all out keeping everything under control but were really relaxed. People were drinking, BBQing (on a raft) smoking, you name it! There were even some water polo players in wetsuits, but they were definitely shivering and didn't make it past the second inning. 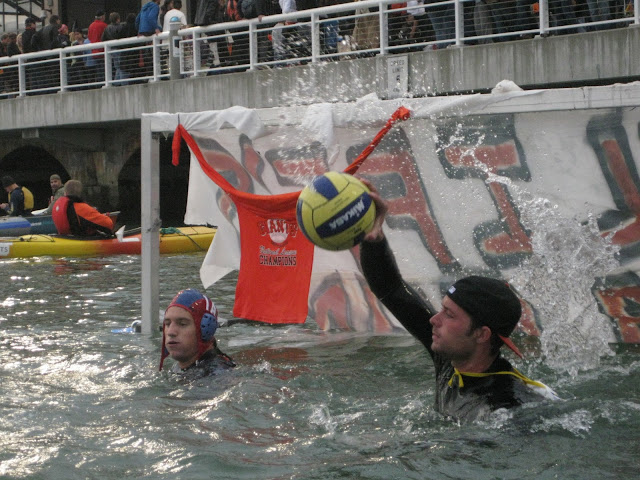 It was crowded but wasn't nearly as bad as I thought it would be. Everyone was in a good mood, nobody was worried about you bumping into them, or blocking their spot because no one could see anything anyways! We all just got to enjoy the atmosphere. 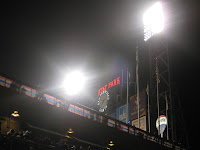 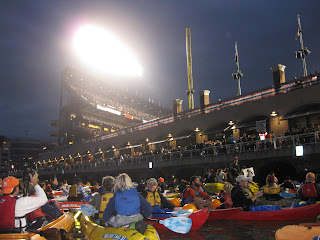 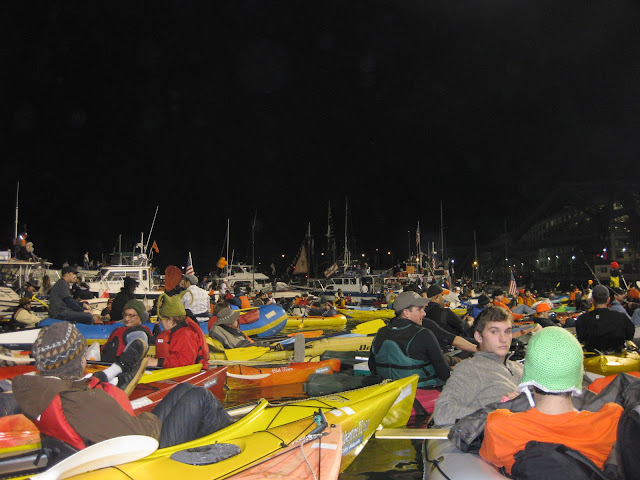 We had our Brian Wilson face with the beard, along with speech bubbles of his quotes "FACT." and "Screw it, Red Bull time" and good thing we didn't abandon them because they were a hit! =) 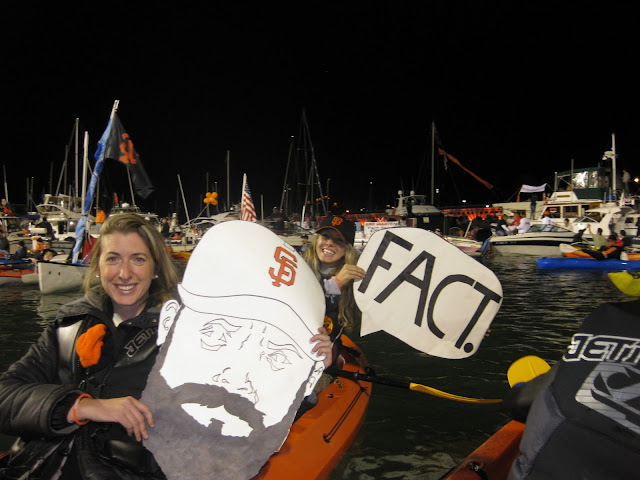 On the way back (in basically complete darkness) we were careful to go very wide around the ships, back to my mom searching for us at the edge of the pier and my dad waiting with the truck. My mom had heard of a kayaker who got into trouble in the channel, flipped and had to have a rescue boat come get him! Needless to say, she was happy to see us paddle back in. 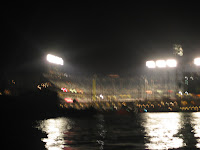 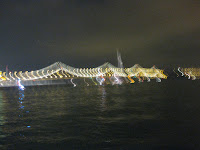 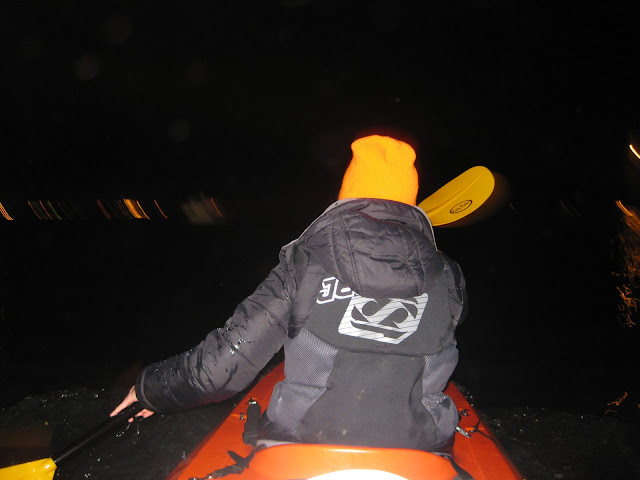 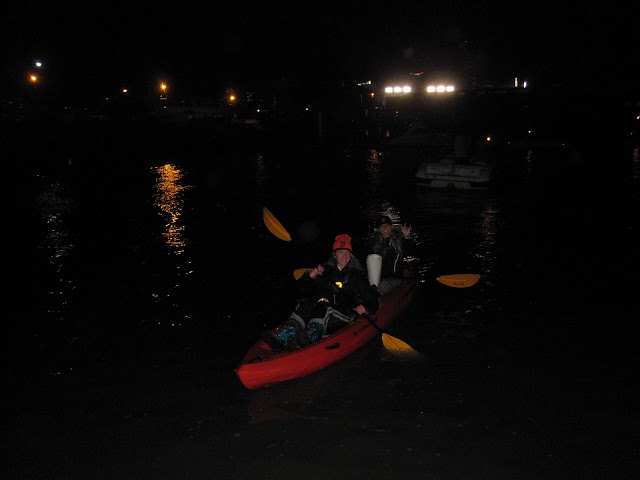 Was an awesome experience! And now I can say I was there in McCovey Cove for Game 1 of the World Series when the Giants defeated the Texas Rangers 11-7!! Go Giants!!!
at October 28, 2010
Labels: Action, Personal