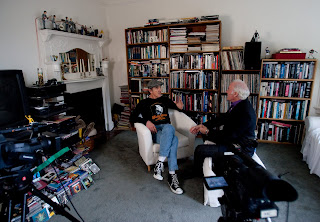 Michael Zagaris and Marc Silber
Today I had a chance to meet legendary photographer, Michael Zagaris, the "Z-man." Marc Silber was interviewing him for silberstudios.tv. My job for the day was to photograph his prints so they had digital files to add to the video clips.

To me, Zagaris is such an idol, and even more so after today. I knew him as the photographer that got started shooting rock stars like the Rolling Stones and then ended up as team photographer for the San Francisco 49ers.

Before I go into detail of the day, let me tell you how it started:
Right as he opened the door to his home, before I had a chance to even introduce myself, the handle of my rolling camera bag broke, it just snapped off. So my bags went falling backwards down the 10 steps of stairs that lead to his house. In that millisecond I thought "oh my goodness, how embarrassing, I'm trying to make a good impression and just drop my gear down his stairs. I didn't have time to dwell on that though, because I tried to save my bag and in that effort, I slipped and I FELL DOWN THE STAIRS!! As my butt slammed onto the ground, I thought, Oh My God, I am mortified! It was like out of an over the top comedy movie... except it was real and it happened to me! I get up, "that was embarrassing" and Michael Zagaris is asking me if I'm ok and helping me pick up my stuff, then says "way to make an entrance"

Seriously... that is my life, that is my luck. Once I knew my gear and person were ok and was alone in the room where I would be photographing his prints, I just had to sit there and laugh at myself... and have been all day.

He comforted me with a story about shooting Lynrd Skynrd, and them being out of their minds on drugs and alcohol and falling over, ripping the canvas and taking down his set up shot... that would make me feel better... except I was 100% sober and am just a klutz. haha!

But moving on to Z-man himself: 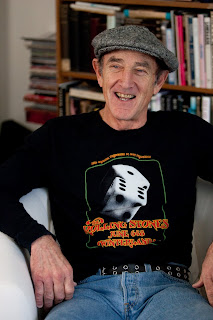 His first step in photography was when Eric Clapton asked to look at his images, thought they were great, said they will buy them and he should really be a photographer... then it all is history from there.

Today, I learned more of his incredible story of living the life of drugs and rock n roll of the 70s.

But, in his office hangs an incredibly moving poster. A photo of Tommie Smith and John Carlos giving the Black Power salute at the 1968 Olympics in Mexico City. The photo is not by Zagaris but written on it is:
To my brother,
The Z Man,
The challenges are dynamic...
The struggle, therefore is perpetual-
And there are no final victories!
Dr Harry Edwards
Organizer
"Olympic Project for Human Rights"
Mexico City Olympics
1968 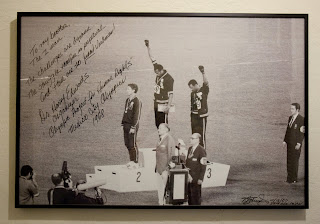 Incredible! Surrounded by rock stars and super stars who talk about the revelations they've made, drug induced or not. But this shows that he was living the life of awareness!
Such a cool dude!!

And here's the link to the video: