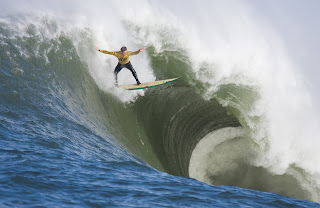 Whoa!! What a crazy/awesome day at Mavericks 2010. This post is going to be long because Mavericks is just once a year (if we're lucky) If you want to jump to just the photos click here 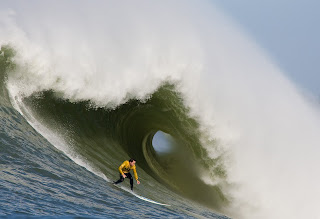 For those who don't know... assuming that's most because my tweets were replied with "have fun in Dallas!" Mavericks as I refer to it, is not Mavericks the NBA basketball team but rather Mavericks the big wave surf competition that takes place in Half Moon Bay. 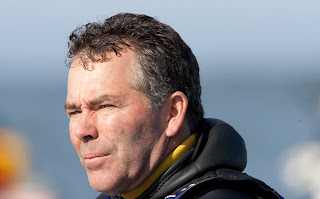 As the story goes (summary of "The History"... in 1960 local surfers Alex Matienzo, Jim Thompson, and Dick Knottmeyer had spotted the giant waves, about a mile off Pillar Point in Half Moon Bay, paddled out with their dog, Maverick, and quickly deemed the waves too dangerous. In 1975 local surfer Jeff Clark started surfing. As years went on, friends and fellow surfers started to join him as rumor of the Hawaii sized waves got out. 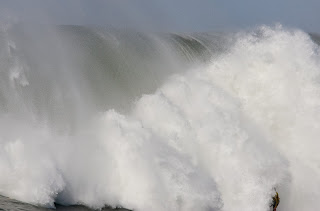 The first official Mavericks took place in 1999 and was won by Darryl Flea Virostko who continues to compete today. 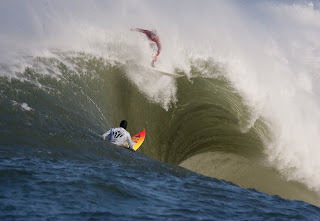 These waves, are huge. Legendary big wave surfer Mark Foo died at Mavericks. This contest is no joke. It is one of the most exciting adrenaline-packed events I have ever witnessed. 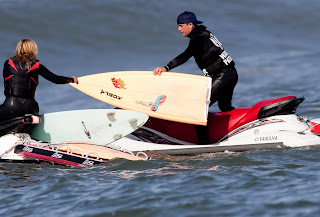 I shot my first Mavericks in 2008 and I can hardly remember anything except being overwhelmed and amazed. In 2009 I photographed the opening ceremony but the contest never had the necessary conditions to go off.  Funny story... in 2008 shooting the ceremony, I was walking from where I parked loaded down with all my gear, out to the beach where the surfers gather, and a guy in a truck pulled up and asked if I needed a ride because he had a parking spot reserved near the beach. Now note, I don't recommend entering cars with strangers and in retrospect was a bad idea, but... he did have Mavericks logos all over his truck, figured he was affiliated, and knew anyone out at Pillar Point that day was likely Mavericks related... so I got in. My flaw was in trying to make small talk. He says "so you're a photographer" (yeah good guess as I'm loaded down with lenses and cameras) I reply "yeah... what's your involvement with Mavericks?" ....A: "I'm a part of it"... K: "oh cool, how so?"... A: "I'm one of the surfers" ... yes, I am world largest dummy who knows nothing about surfing... as it turns out he even won the competition in 2005 haha! Anyways... 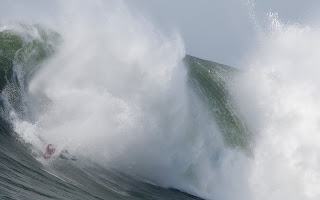 This year I was so pumped up and Mavericks didn't let me down! 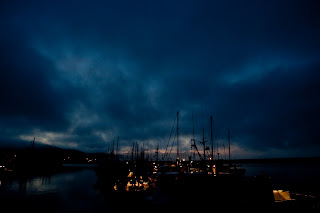 Woke up at 4am and arrived in Half Moon Bay at 5am. Everything got settled and I was on the media boat and out at Mavericks by 7:30am. The captain of the media boat the Huli Cat, told us we couldn't smoke pot, even if we had a cannabis card, hold on to the boat with one hand and our gear with another, never let go of the boat, if we had to vomit do it over the side of the boat not in the bathroom. 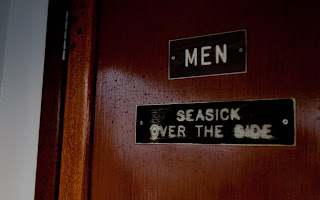 I thought this was funny because in 2008 I didn't take Dramamine or anything and I was totally fine... this year was different. By the time we got out to where Mavericks takes place, I was feelin it. I searched for my Dramamine but it was too late. While sitting on the boat, in between shooting, I had to lean over the side of the boat and yak.... and then continue shooting. I was not alone. I saw at least 5 photographers barfing. And some guys had to stop shooting and stay in the cabin because they were too sick. 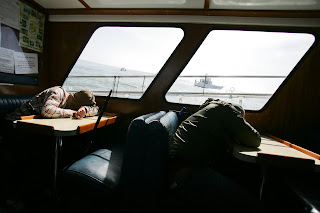 When I went into the cabin it was so rocky, I got slammed around like a rag doll and have some nasty bruises on legs, hips, arms, everywhere. 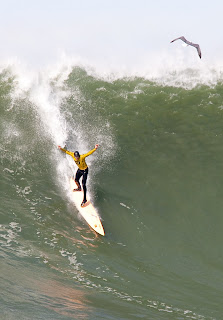 Now to the competition... was so awesome!!!! The waves were HUGE! My shots this year were better, without question! Jump to the series here full set is up on ISIphotos.com and my purchase site (though sorry you cannot purchase through this portal)

Some of the surfers were wiping out so bad! Thankfully all the surfers made it through relatively uninjured. 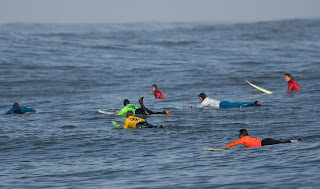 Some spectators weren't so lucky! A rouge wave aka freak wave hit the beach the spectators were watching from and it knocked down over 40 people, injuring 13. Some people had to be taken to the hospital for broken bones. My neighbor and fellow photographer Ed Ritger who was shooting from shore lost all his gear!! 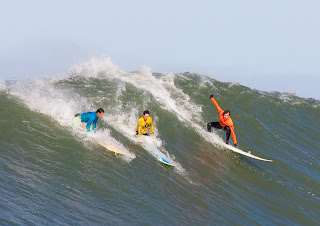 When I caught up with John Todd later he said his boat had a 10ft wave break on top of them in the channel, nearly capsizing the boat and he lost his 5D. Another boat rocking in the waves slammed a lady on board so hard her head cracked the glass of the window on the boat. CRAZY!!! 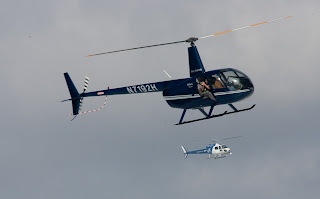 Great day! Had such a blast. It's days like this when I absolutely love my job and the excitement I get to experience vicariously!! Never in my wildest dreams can I imagine surfing on those waves... or even waves 1/4 that size but to be a part of Mavericks is so (as surfer turtle in Finding Nemo says: RIGHTEOUS!!!