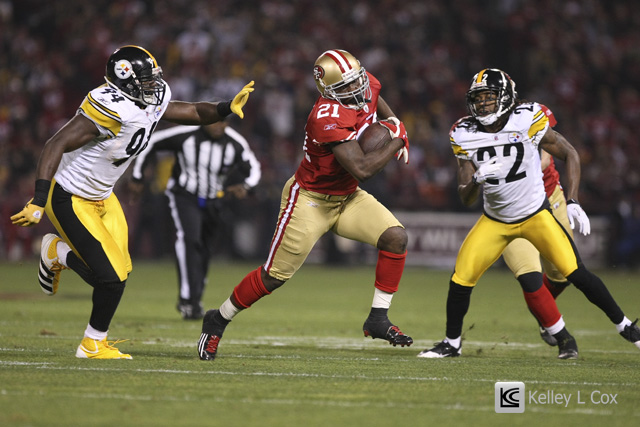 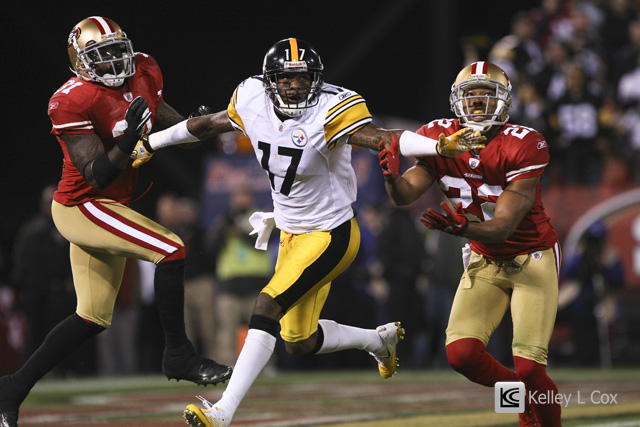 Headed over to Candlestick Park for an exciting Monday Night Football game between the San Francisco 49ers vs the Pittsburgh Steelers. 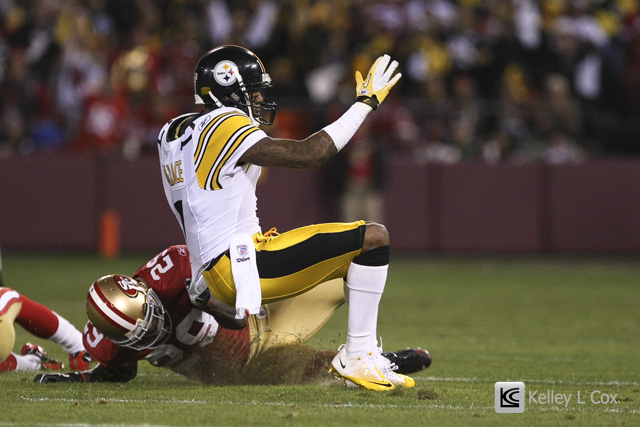 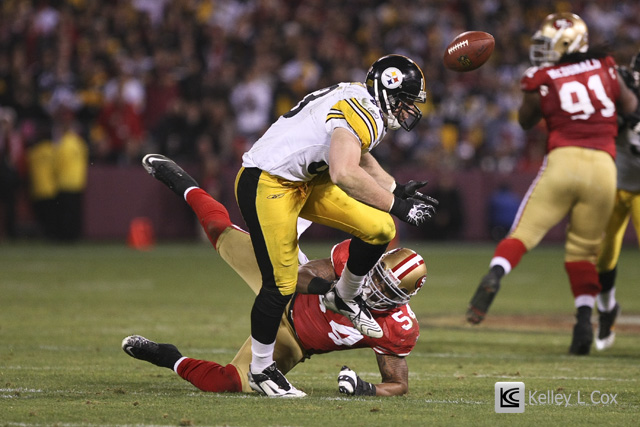 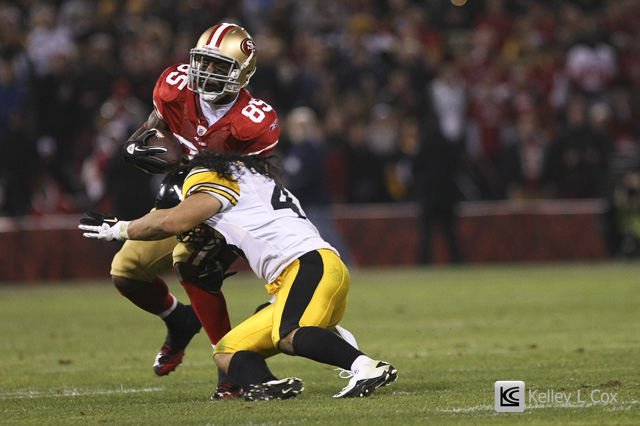 After warm ups, with the players in the locker room waiting to be introduced, all of a sudden the lights went out. Apparently a transformer blew up (video here) which actually worked out nice for me because I was feeling sick and it gave me 20 minutes to huddle in the corner of the field while the ESPN Monday Night Football Crew tried to roll with it and figure out what was going on. 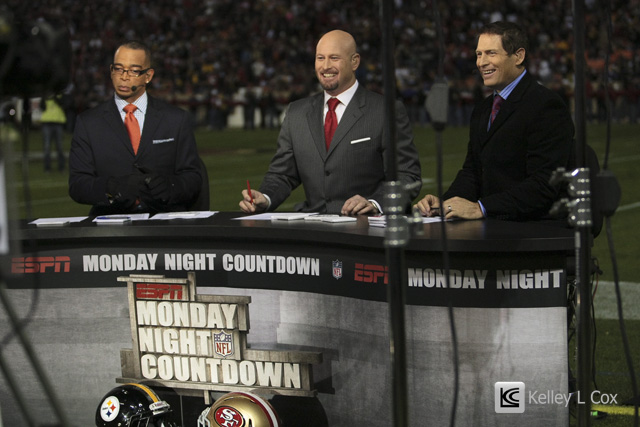 Some emergency auxiliary lights came on but even as power came back, the tricky part about stadium lighting, they take a couple minutes to warm up to turn back on. 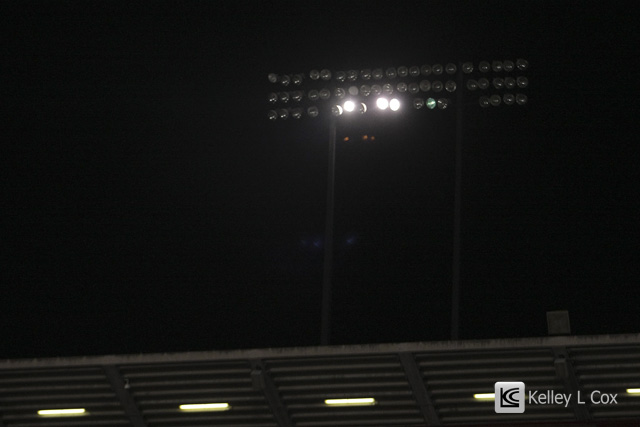 Players came back out to warm up again, and without introductions, the game started. 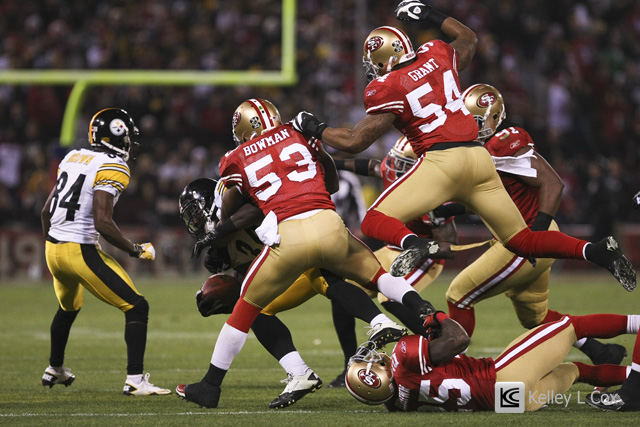 The Steelers first two drives were intercepted. Leading to field goals as David Akers is nearing setting the record for field goals in a season at 38, with 40 being the NFL record. 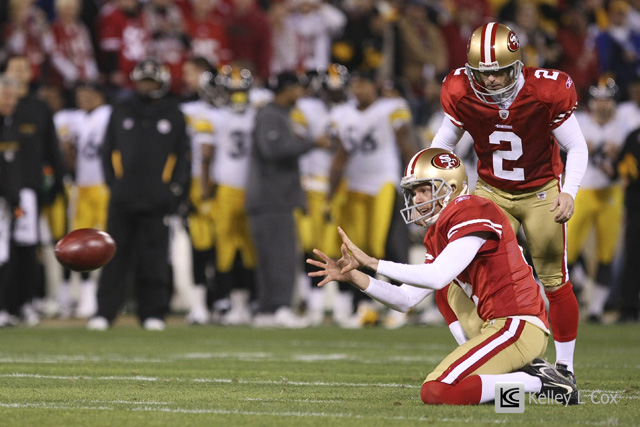 But niners were able to put up a touchdown with a nice catch from Vernon Davis. 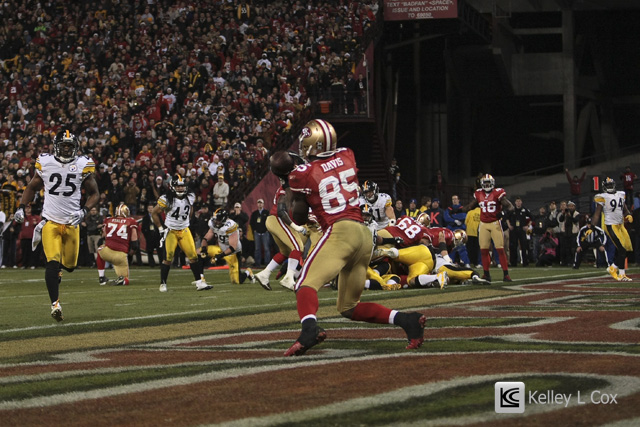 Who celebrated perfectly for the photographers... or at least the ones over there. 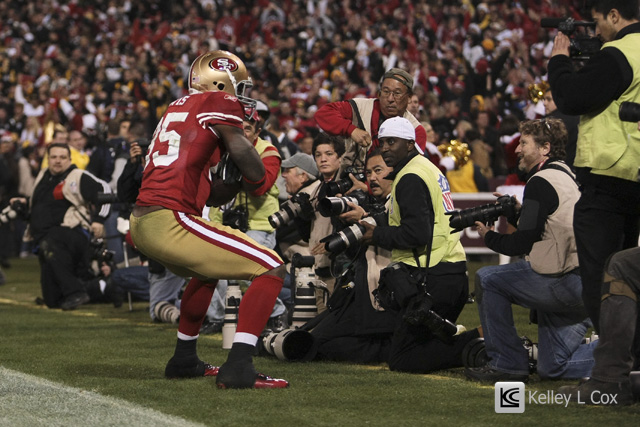 But Tarell Brown gave me a little celebration. 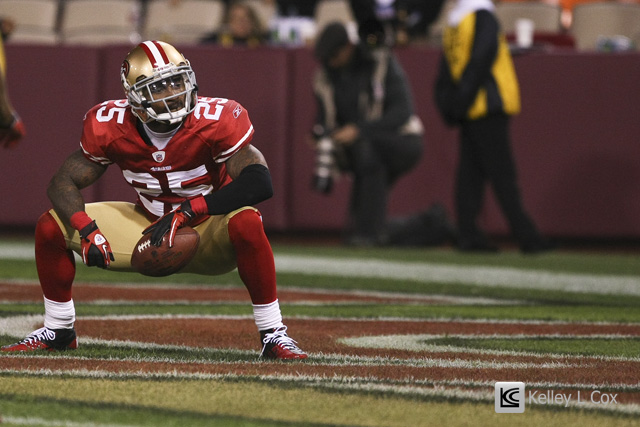 After this great interception. 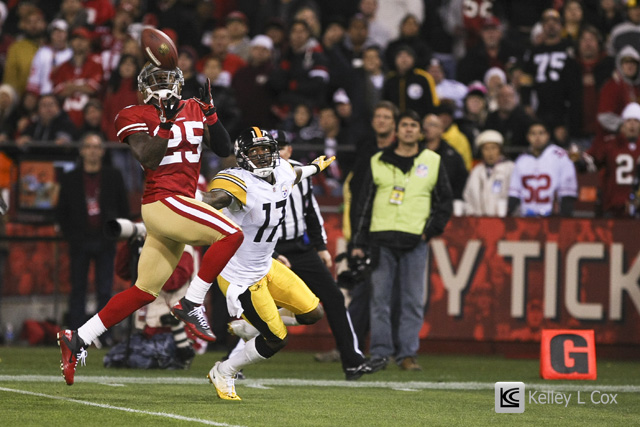 Niners were all over Ben Roethlisberger who with a high ankle sprain couldn't get out of harms way. 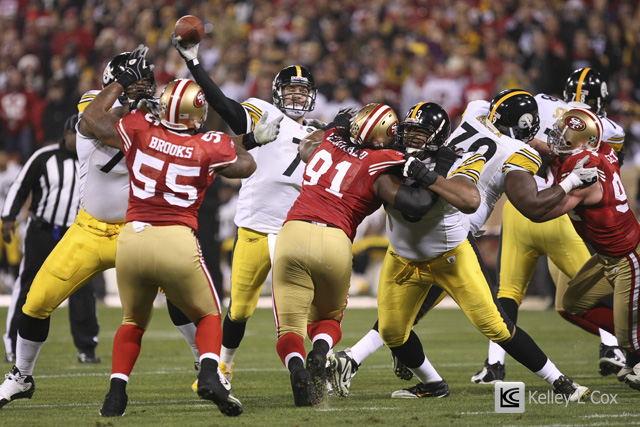 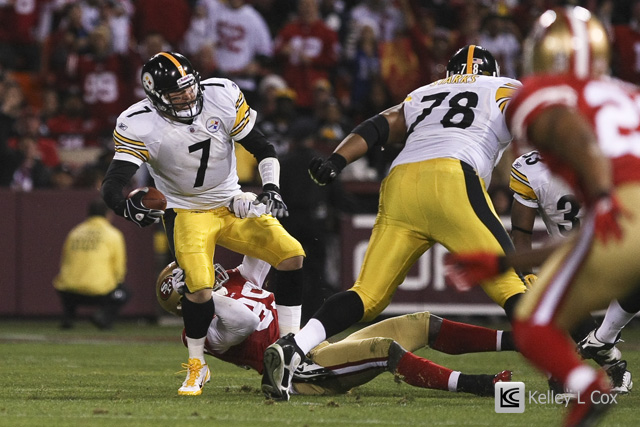 Thankfully Alex Smith was a little quicker on (or off) his feet. 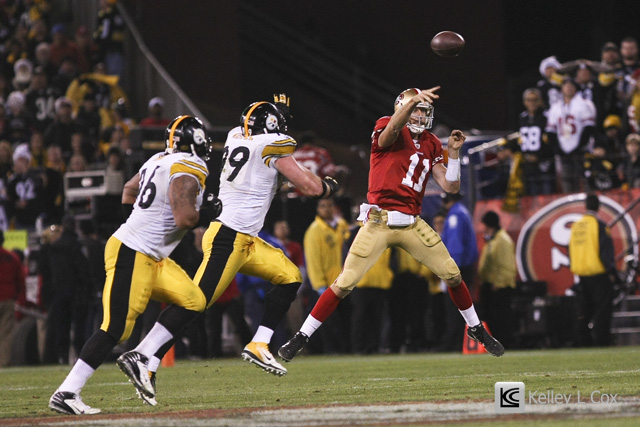 It's amazing how Jim Harbaugh has been able to use Alex so he is cheered by the same fans who used to boo him. 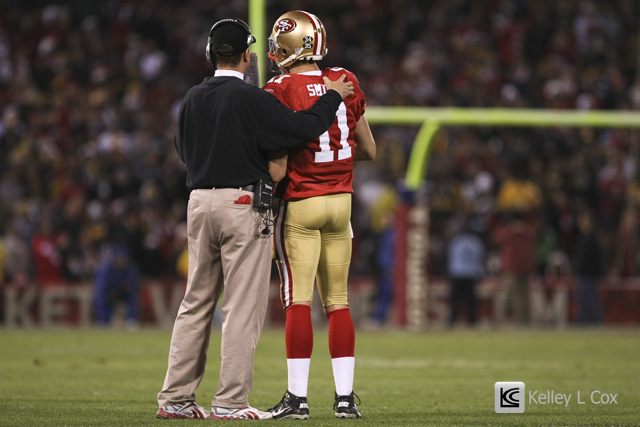 In the second quarter lights went out again with players on the field. 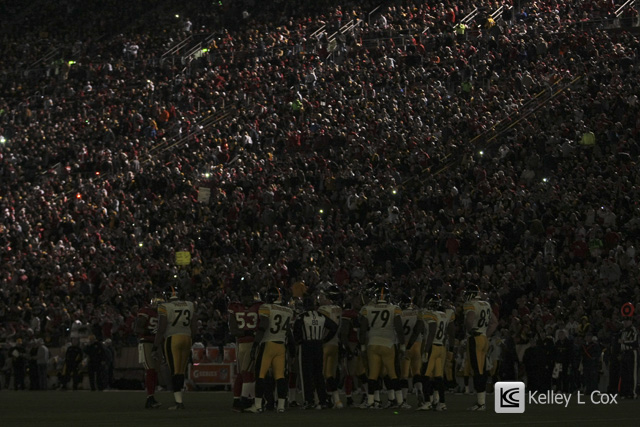 One of the worst things about these delays is trying to make sure the players stay warm and their muscles don't get tight. So they were doing drills in the darkness and otherwise wearing these coats. 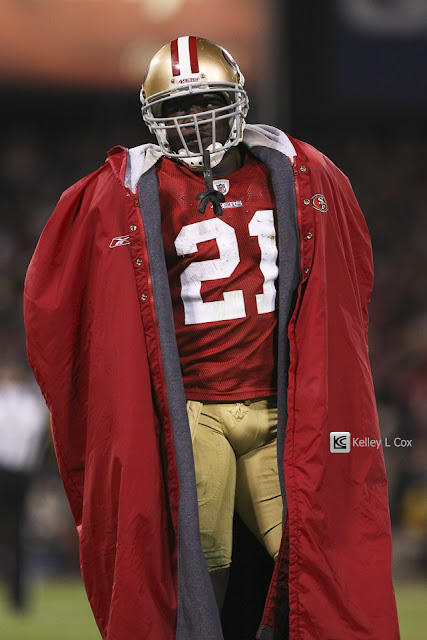 Apart from one fan storming the field, I was impressed that 70,000 people were able to keep calm and collected through both outages at a stadium which has made headlines for violent fan vs fan attacks. It must be that Christmas spirit! 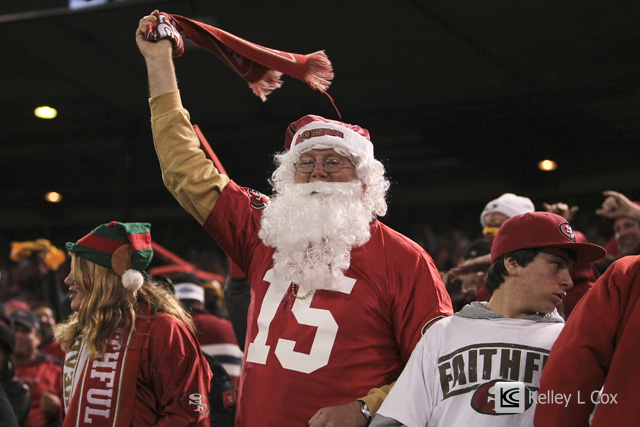 I was excited to see Troy Polamalu now that his hair is celebrity status. 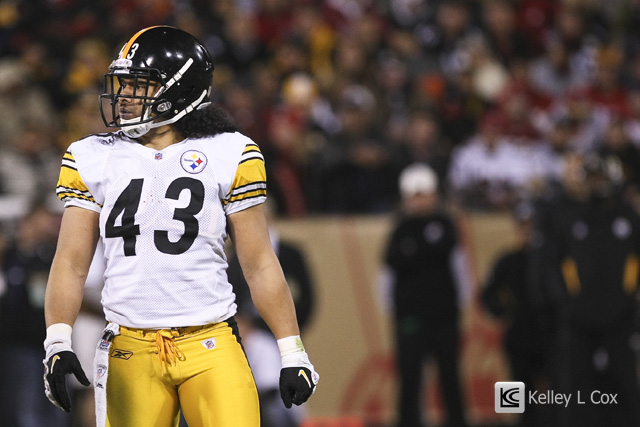 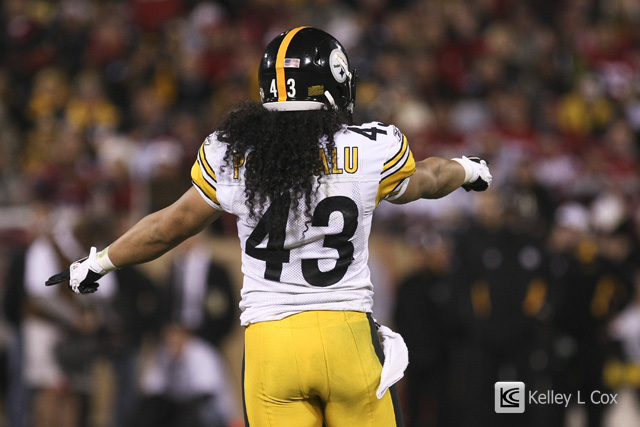 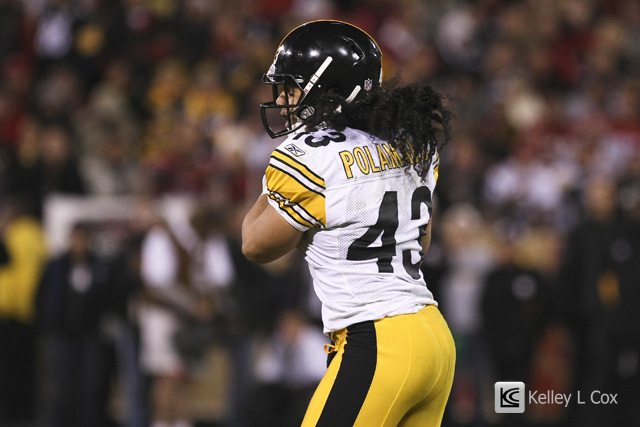 But another celebrity status on the field, was supermodel Marisa Miller. I was really excited to spot her with her husband Griffin Guess, but had to explain to my fellow photographers who she was. I thought they were supposed to be more excited than me, turns out no! 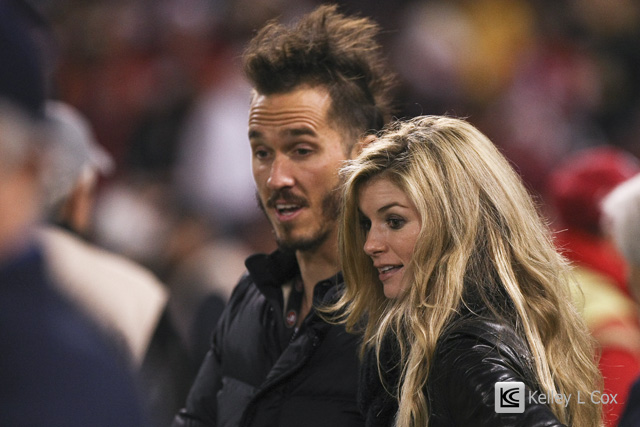 It was exciting to see the niners pull off another home win and in the final 40 seconds up 20-3, lights start flickering again. But they were able to finish the game without another delay. 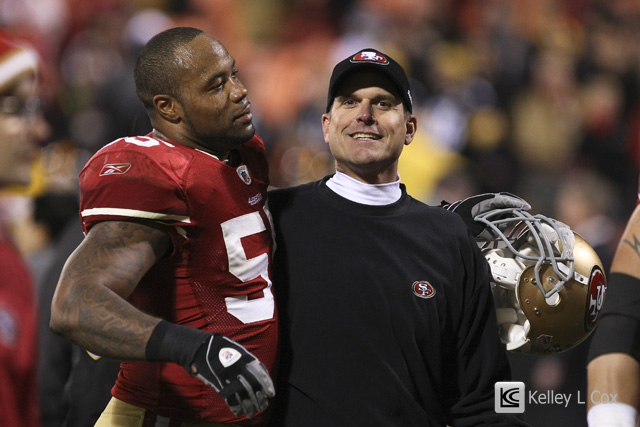 They have an away game next week and then it's playoffs, hopefully Joe Staley will be100%. 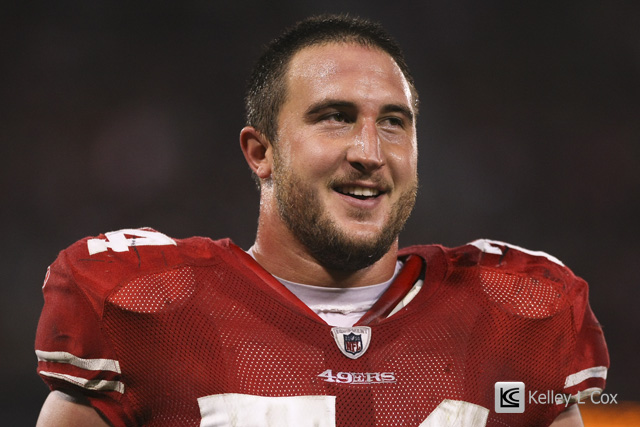 And Patrick Willis will be back! 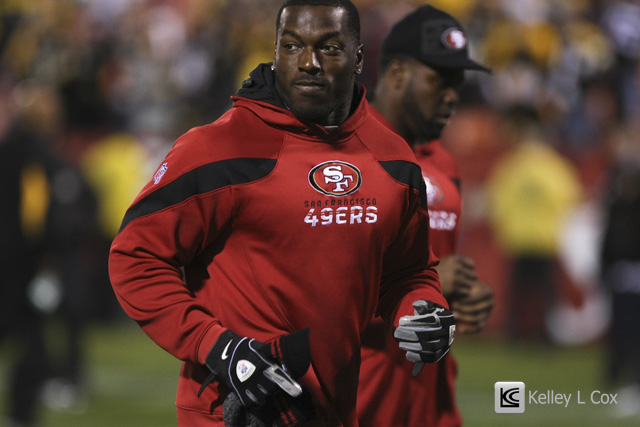