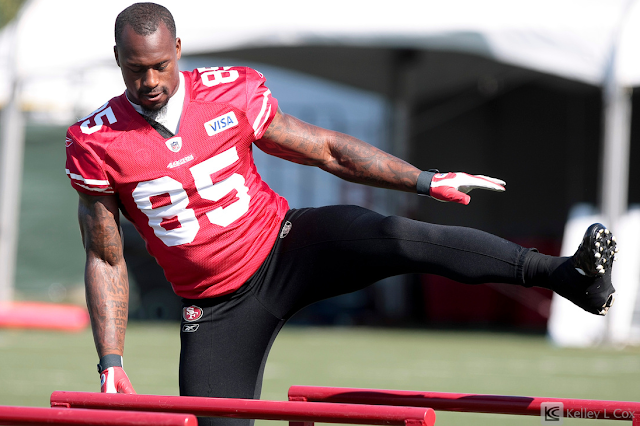 Headed over to the 49ers training camp today to capture Alex Smith practicing for the first time. 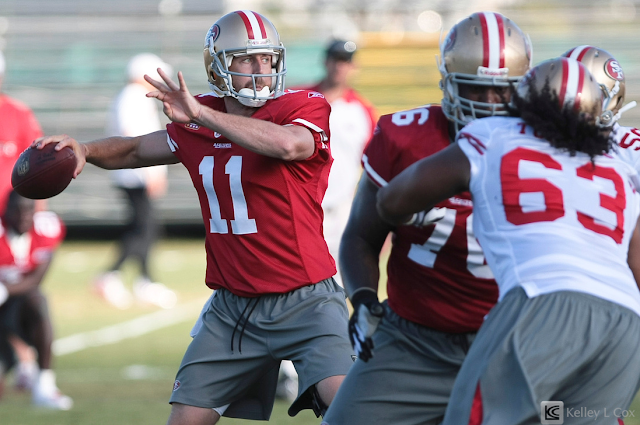 Though his contract was signed, there was some free agent rule (I'm not sure how this all works) that he couldn't practice until Thursday. But he had been at practice the days before so was already familiar with the other quarterbacks who will be studying under him/vying for his position. 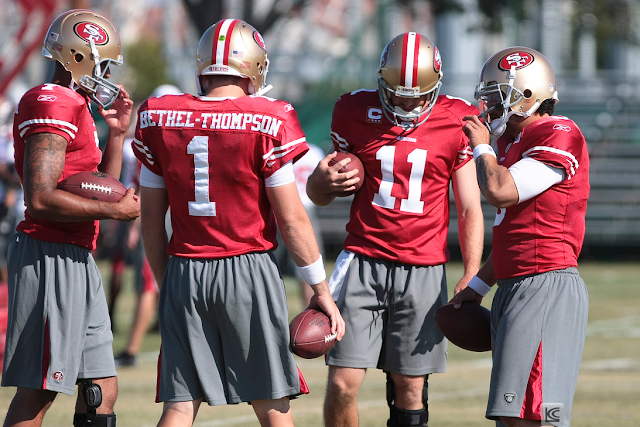 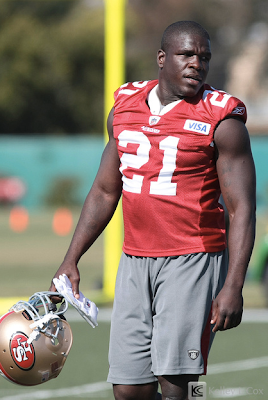 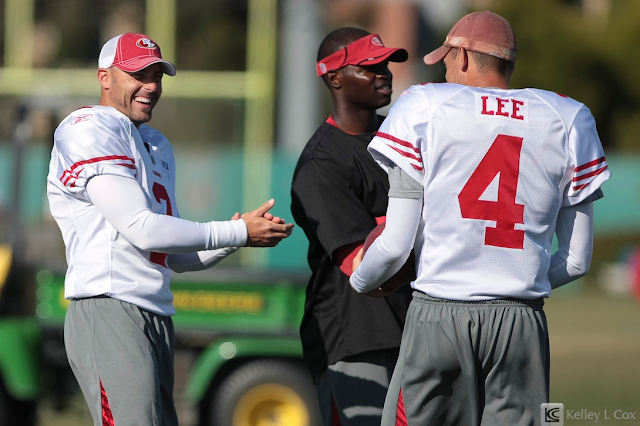 Before heading in, I took a photo of this unknown (to me) player because I liked how he was carrying the medicine ball. Come back in to hear all the reporters talk about how the 49ers just announced Braylon Edwards signed with the team, and is wearing 81, temporarily. Ha, good thing I photographed him! 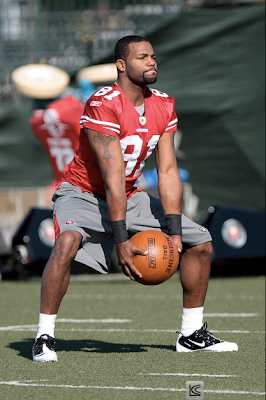 Still, I went out again to get some more photos of him. 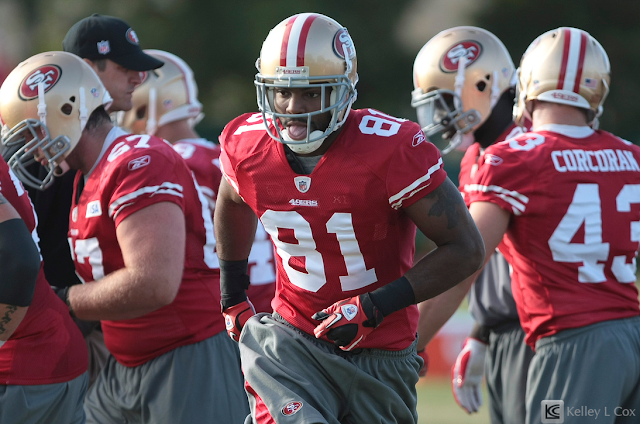 I had some downtime between practice and the press conference, so I was on gchat with Polina looking over links she was sending me for opinions on possible bridesmaids dresses. I laughed at myself, here I am in an NFL media trailer photographing the 49ers... and on my break, I'm cruising wedding apparel websites... though I consider myself "one of the guys" I suppose I am still very much a girl! haha. Press conference time. I enjoyed Harbaugh's avoidance to compare Alex Smith and Colin Kaepernick, one reporter was giving him a hard time, but he said he didn't wish to diminish either, they are both good. Follow up question, "The Beatles or The Rolling Stones?".... he replied "I'm not into music, but they are both great!" laughed it off and proceeded answering other questions beyond the time limit. 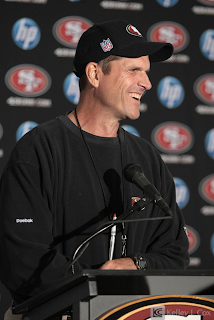 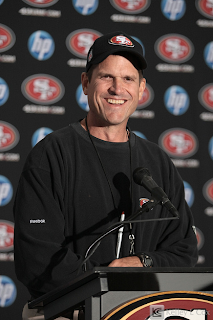 Next Braylon Edwards took the podium and addressed the fresh start he'll be taking advantage of at the 49ers, a long time family friend of Coach Harbaugh who has had some off the field situations affect his career. He noted that he's older than some of the other guys but said, "I didn't come here for the choir robe, I came to make some noise!".... new favorite quote for me. 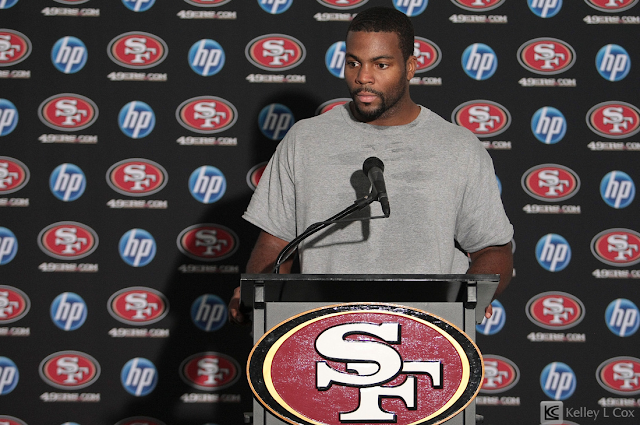 And lastly, another person looking for another fresh start, not new with the 49ers, but with Harbaugh coaching the 49ers, Alex Smith. I sincerely hope this is his year! 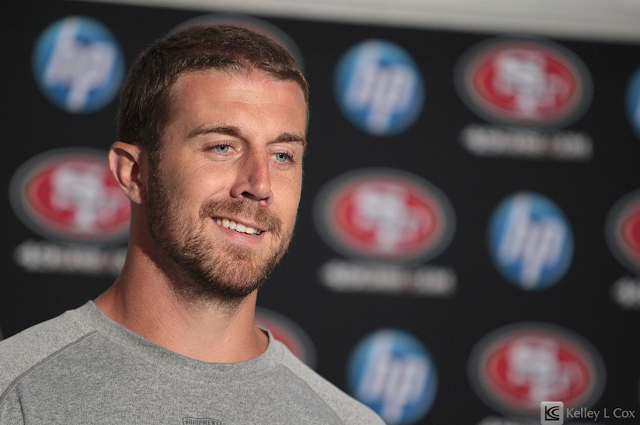 You might think these conferences take place in some fancy press room since all you see is the nice lil background... actually, they take place in a tent, on the grass, next to a trash can haha. 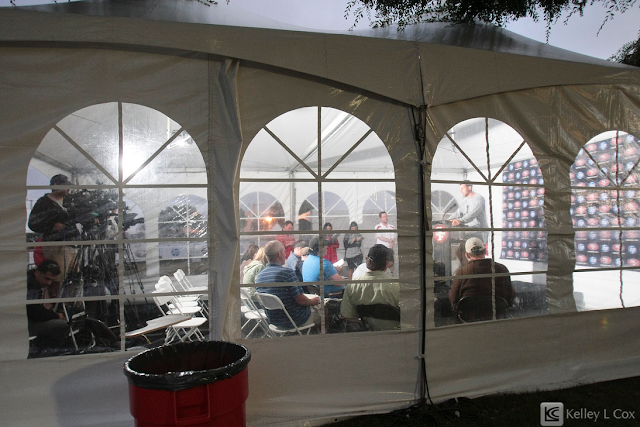