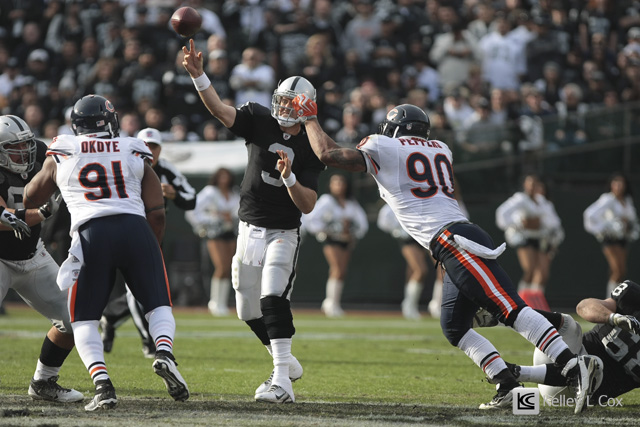 Headed over to O.co Coliseum for the Bears vs the Raiders 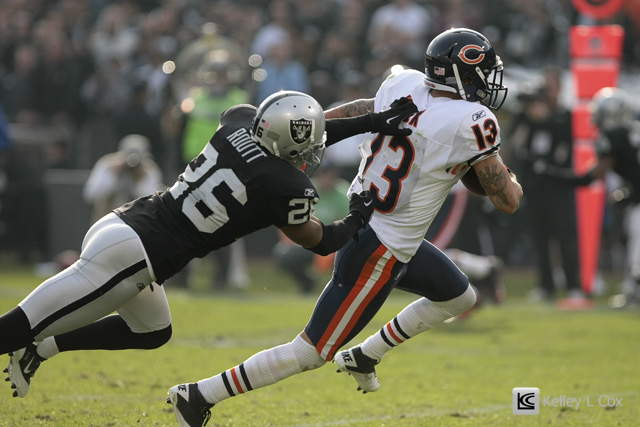 I always arrive early to set up the DSL cables I transmit from, claim a good spot to sit in the dugout, get some food, etc. It's funny because the pathway to the field goes right by the visiting team locker room, so a lot of times they are heading down the stairs for the field to warm up at the same time as me. Once I had a player offer to carry my bag down the stairs for me (such a gentleman, but I carried it myself... girl power!) this time I got to witness, won't name any names, a player in front of me trip down the stairs and almost fall. He caught his footing without realizing anyone saw him and stepped onto the field chanting about what a great game he was going to have because he so quickly recovered his stumble down the stairs. Haha. Silly boys. 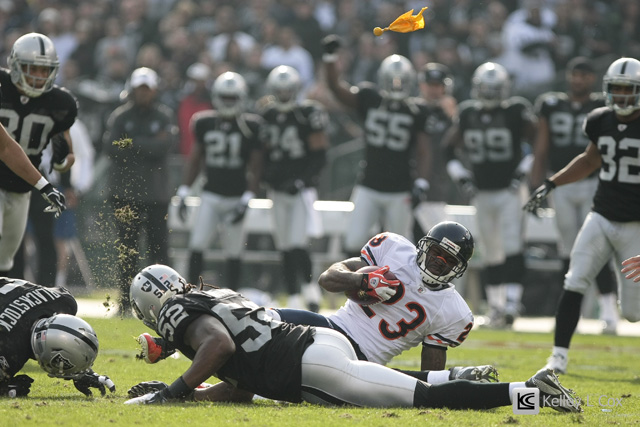 As the players were warming up, Coach Hue Jackson was having a great time dancing to the music. 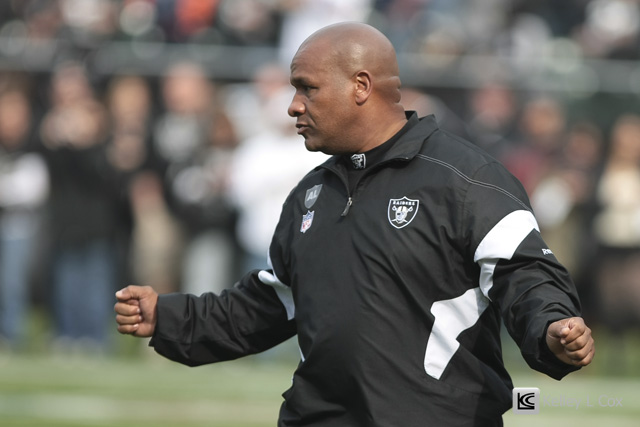 I also liked DeMarcus VanDyke whose mouthguard looked like a pacifier ;-) 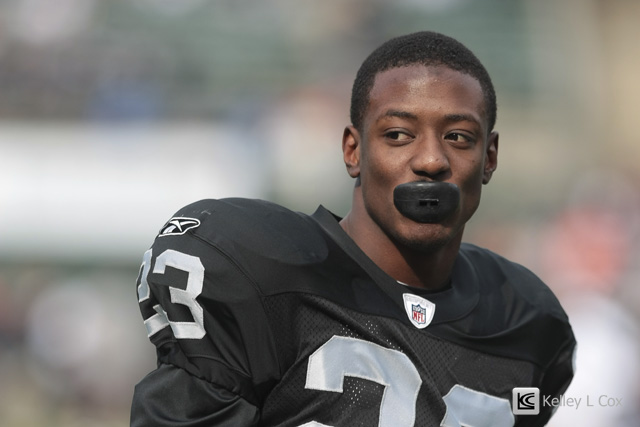 But my favorite moment of pregame was Aaron Curry returning to the locker room... 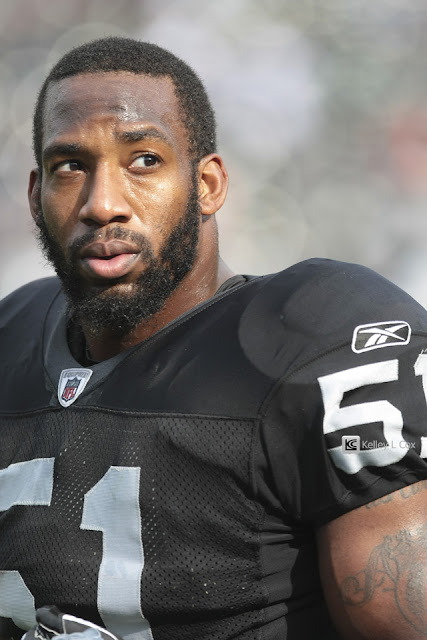 Then hearing a girl call his name he gave this coy lil smile. haha. 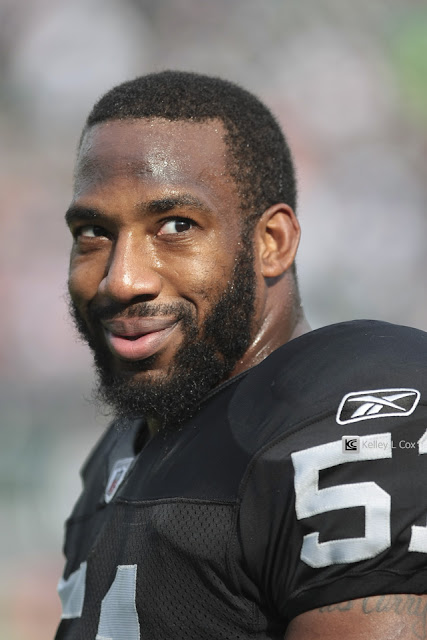 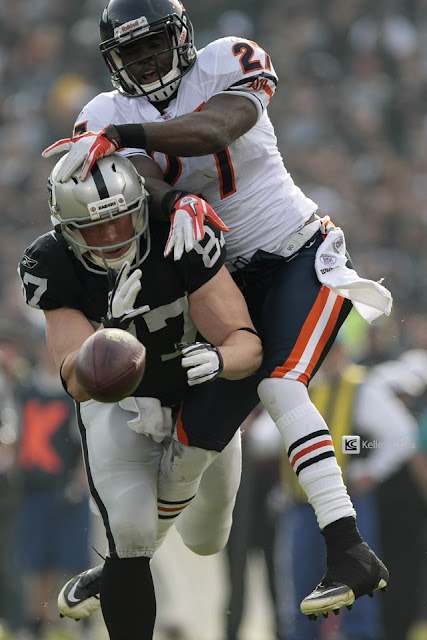 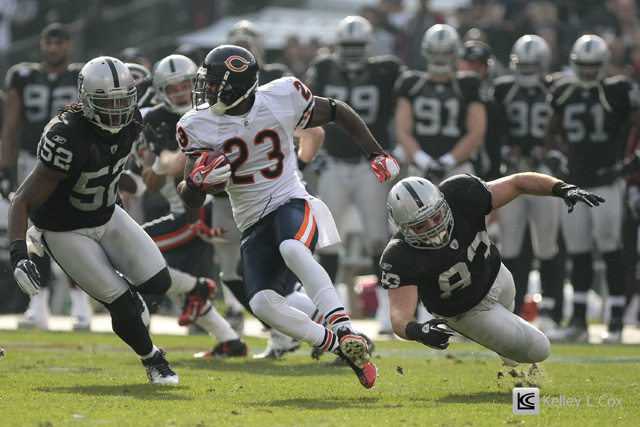 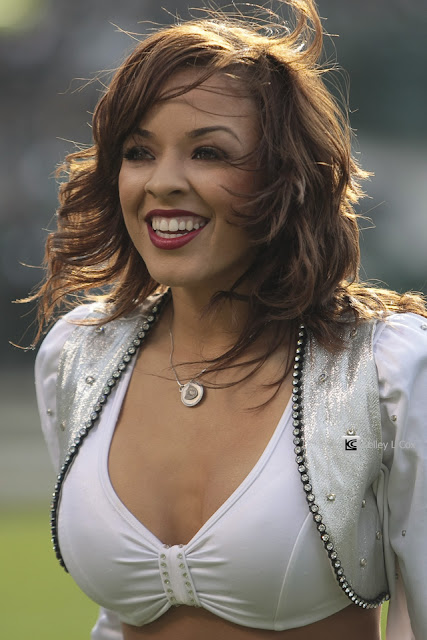 Bears were without quarterback Jay Cutler, 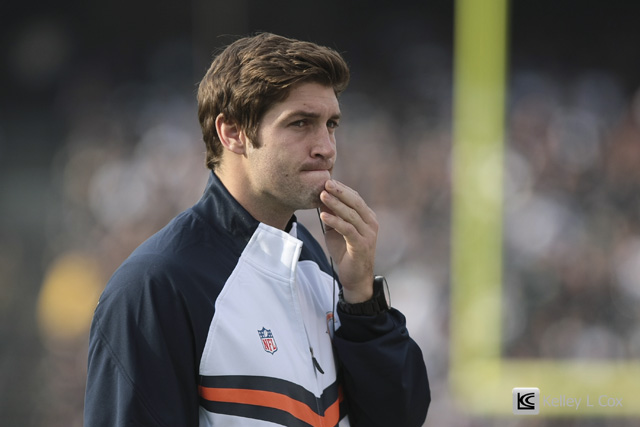 I'm sure much to the dismay of Bears Head Coach Lovie Smith. 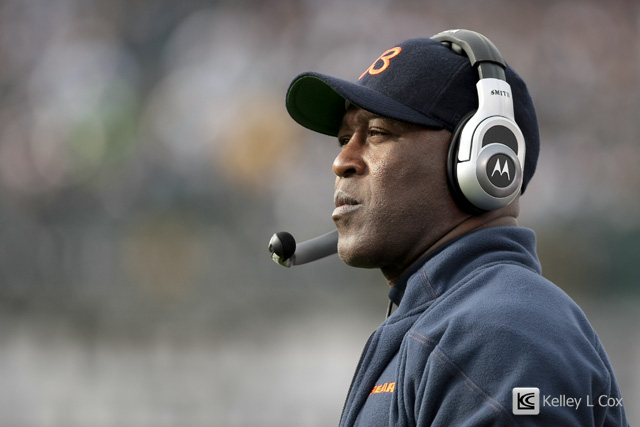 Last Raiders game I photographed, I made an image of Carson Palmer getting sacked and it was my very first photo published in Sports Illustrated (yay!) with the article "Give Him Time" Well, Carson Palmer's had time, and did a great job avoiding tackles and getting the ball down the field. 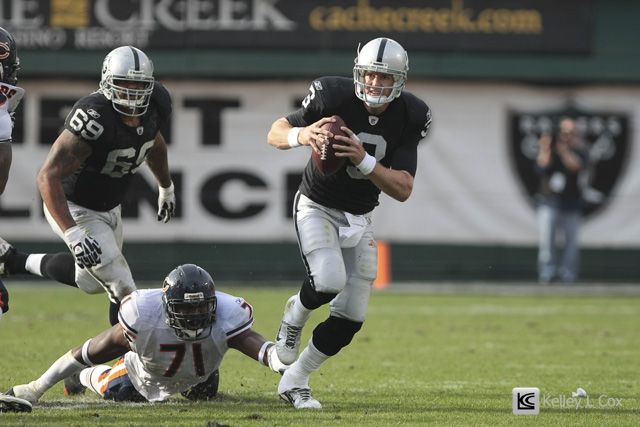 Only problem was he brought them down the field, only to be stuck kicking a field goal as Sebastian Janikowski scored a record 6 field goals. 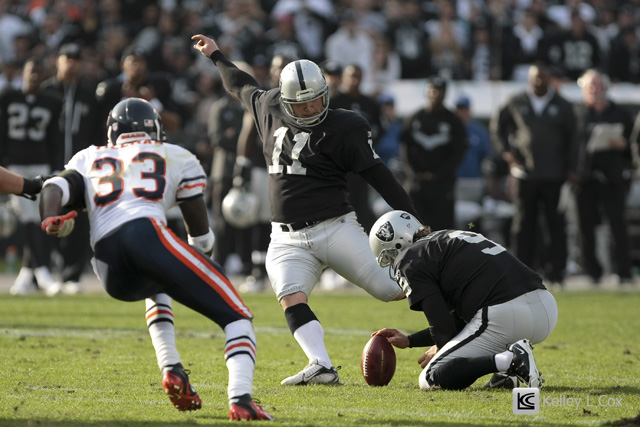 Finally in the fourth, Michael Bush was able to run it in for a touchdown thanks to some great blocking! 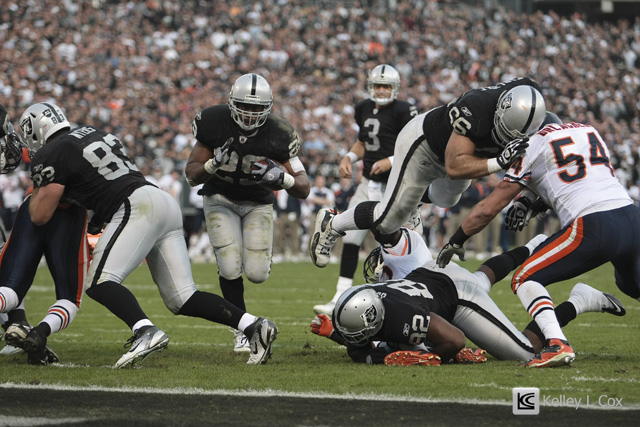 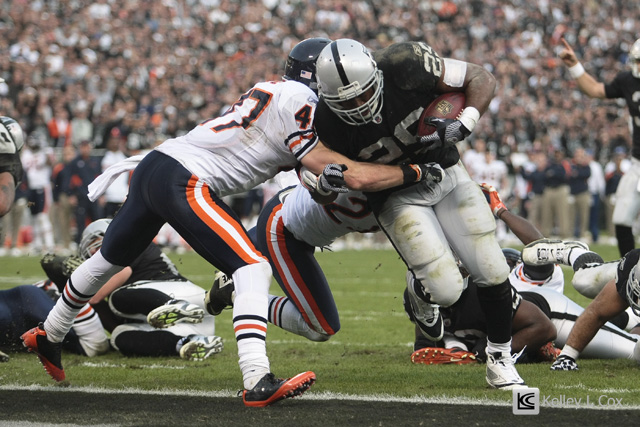 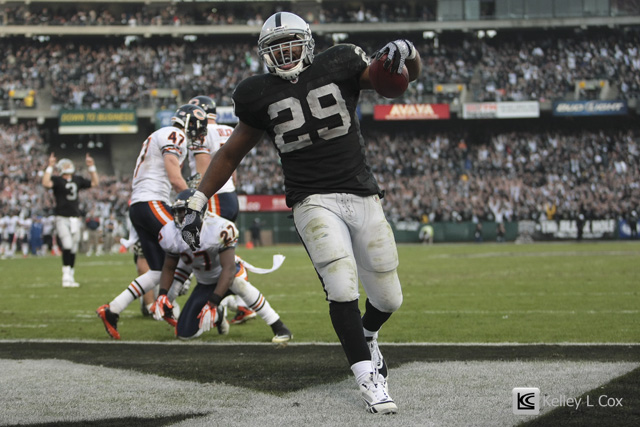 Bears answered with a late touchdown of their own. 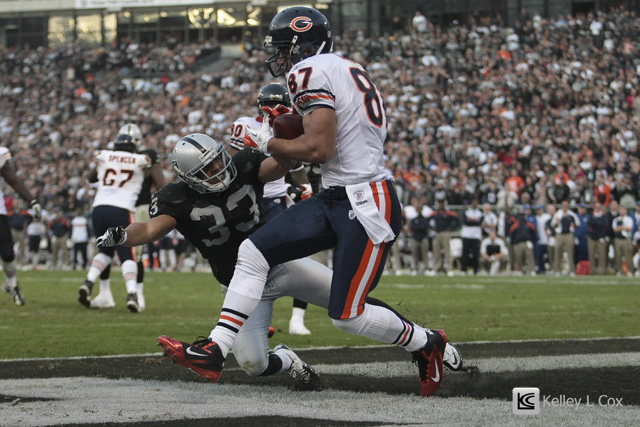 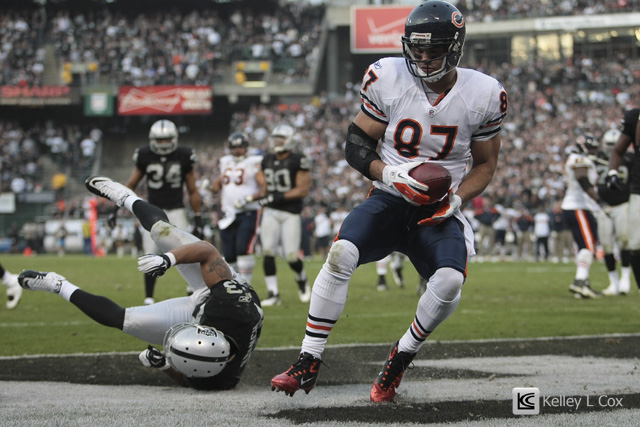 Bears tried for the onside kick. 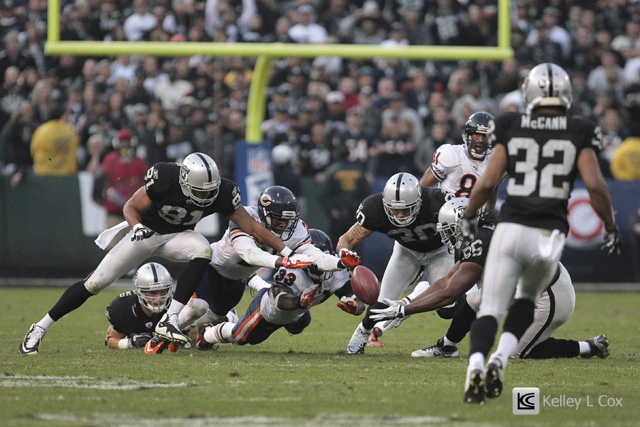 But Raiders were able to gather the ball for the 25-20 win over the Bears much to the excitement of Marcel Reece. 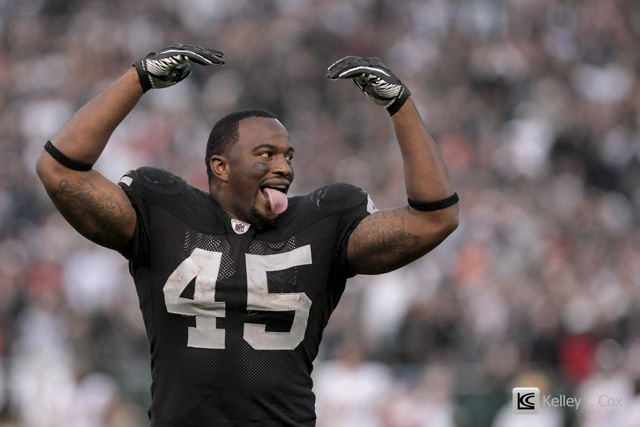