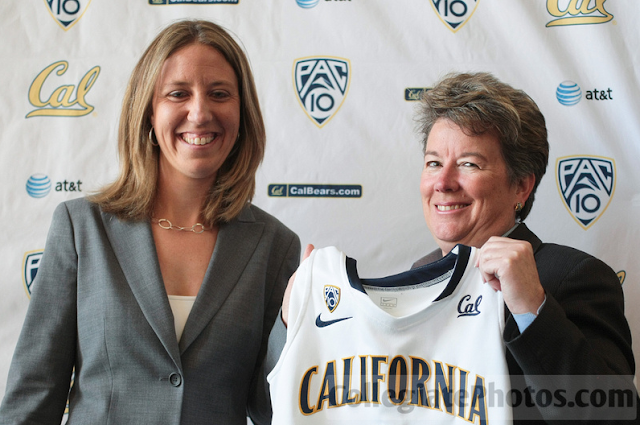 Today was the big announcement of Lindsay Gottlieb as the new head coach of Cal Women's Basketball. After three years at UCSB, she returns to Cal where she was once assistant coach under Joanne Boyle. After being inspired by Deanne Fitzmaurice's "Freak Season" on Tim Lincecum, I felt the need to do something similar. Though Coach G won't be starting pitcher winning the World Series, she could very well be the women's head coach that leads this Cal program to an NCAA title! Either way, I'm excited she allowed me to follow her around throughout the day as I document the process. Big shout out to photographer Mollie McClure who did a lot of amazing work with Women's Basketball in the past and connected me with Lindsay for this gig! 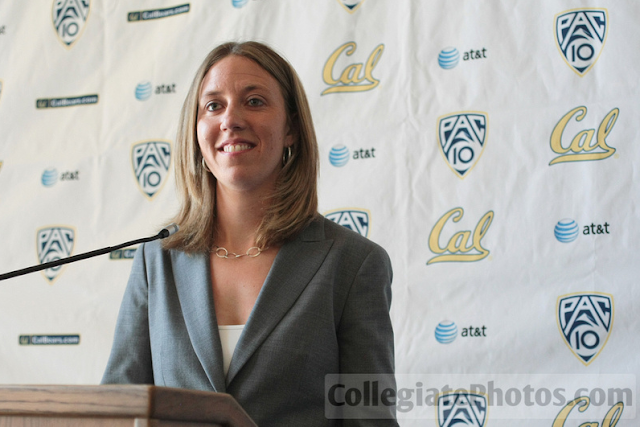 Coach G came in, just a suitcase, laptop and her speech printed out, and was ready to get down to business! 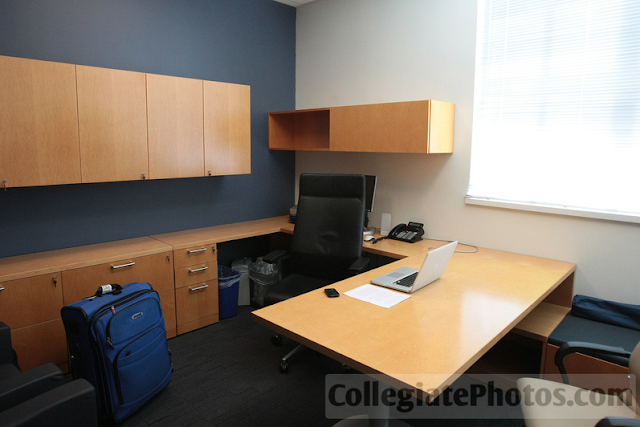 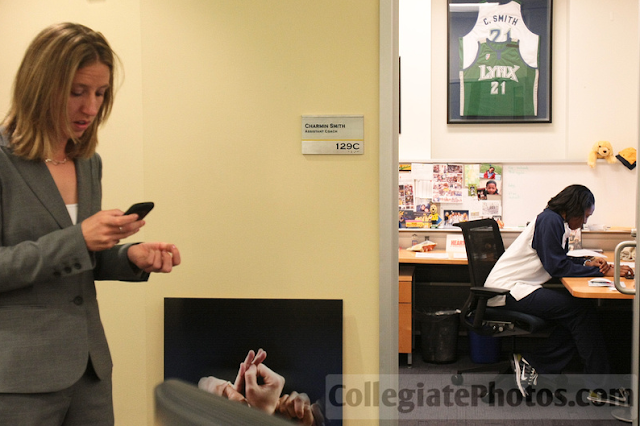 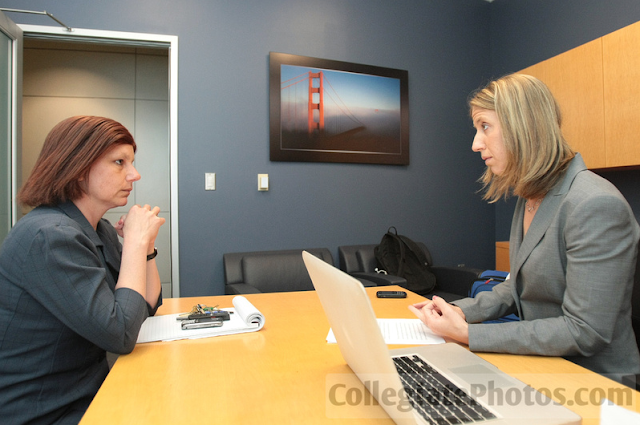 She made the rounds of Haas before the press conference and it was amazing to see all the coaches and staff welcome her with open arms. Instead of introducing herself, it was them seeing her walk in the room, and saying "Welcome Back!!" with open arms and genuine excitement to have her back on the Cal campus. 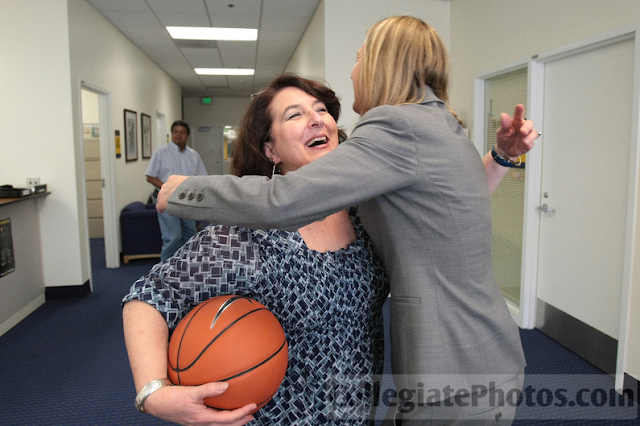 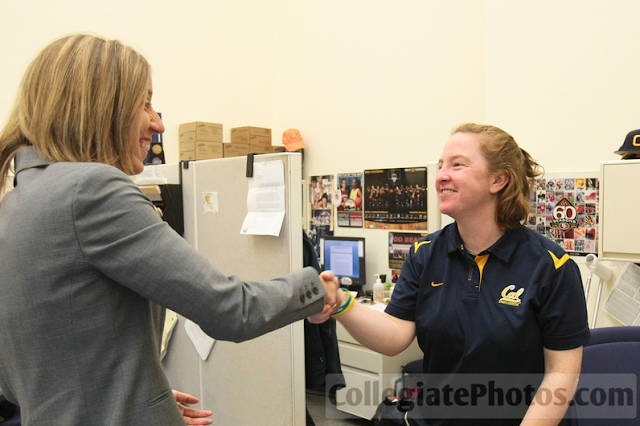 Though she did have to introduce herself to Men's Head Coach Mike Montgomery, since he arrived after she was already at Santa Barbara, he was equally friendly and they instantly connected. 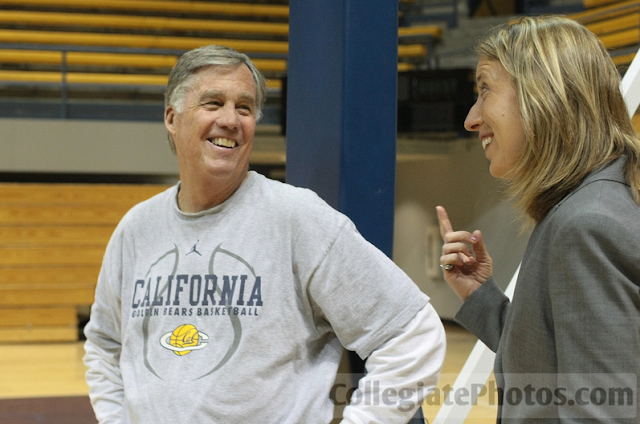 Then she had some quiet time in her office to go over her speech before the press conference. 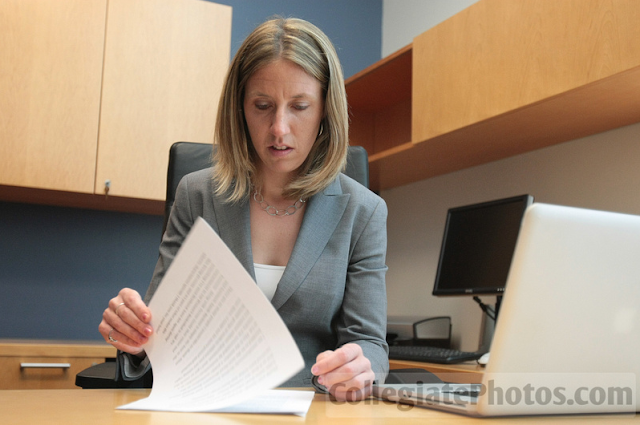 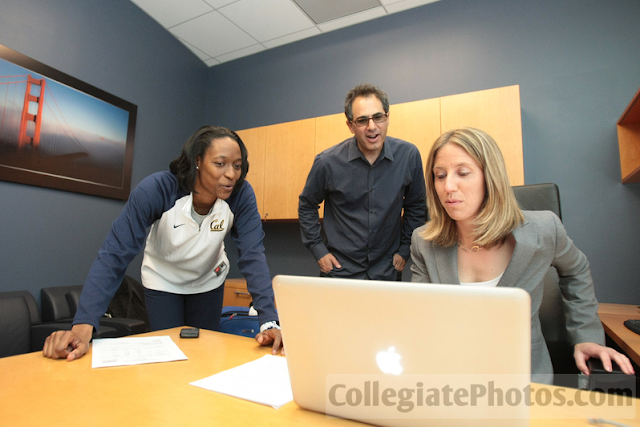 Of course to cause trouble with Assistant Coach Charmin Smith ;-) 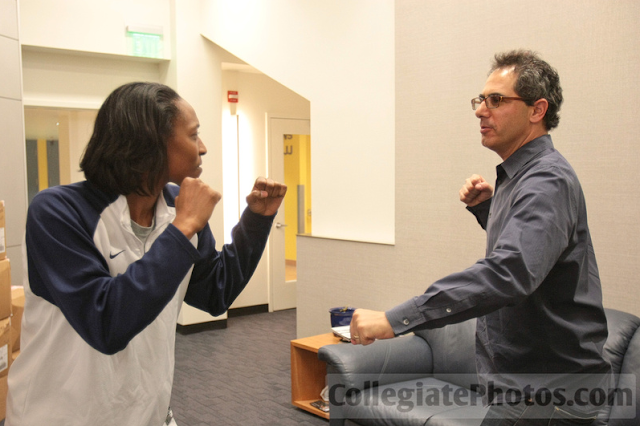 Next, she went to meet the girls. Even though all the girls are too young to have been coached by her when she was at Cal, the instant she walked in the room, they all got up to hug her. Not those phony hugs, but real embraces. Though I'm not a big hugger myself, I loved this unique element of women's sports. Hugs all around!! 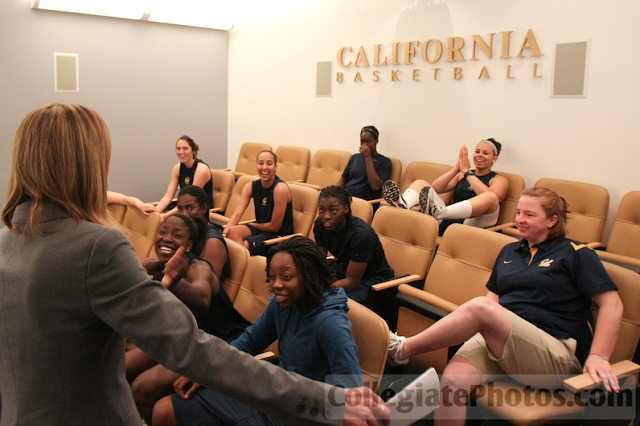 When she sat down to speak with them I shot the first section then stopped. Though I want to document her process truthfully, I didn't want the girls to feel like her words were part of some show. I stood in the corner with the SID and literally started tearing up as she talked about how much she cares about them as people and is committed to them beyond the court... ugh, I'm such a woman ;-) Next thing you know I'll be a hugger! 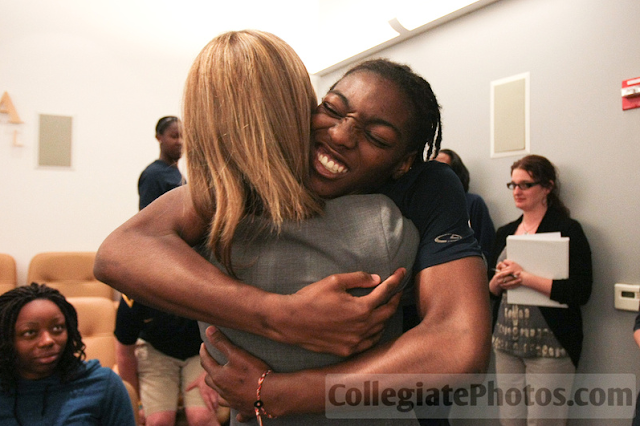 Next was the press conference with the girls, and they already felt like a real team. 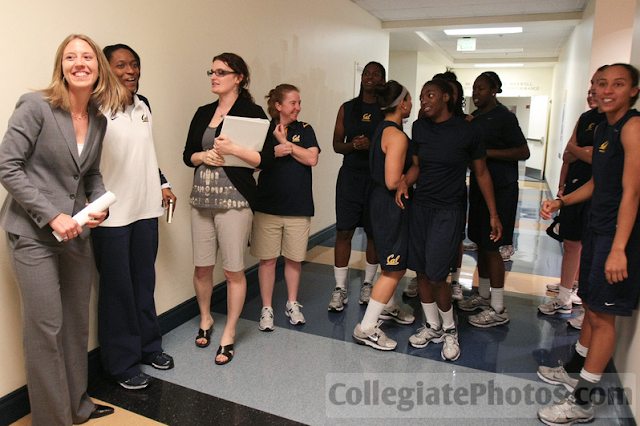 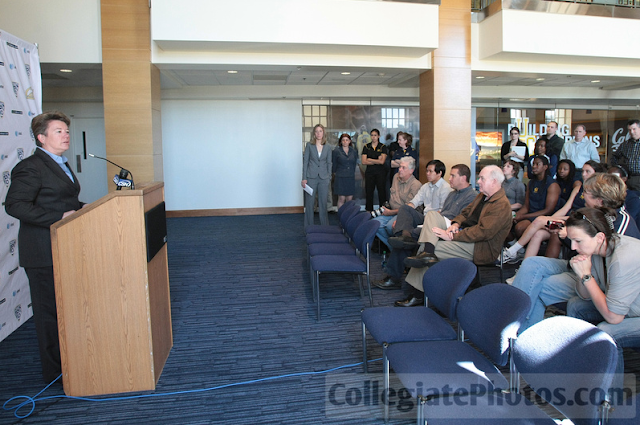 Everyone seemed excited to have her on board and she took to the press like a champ. 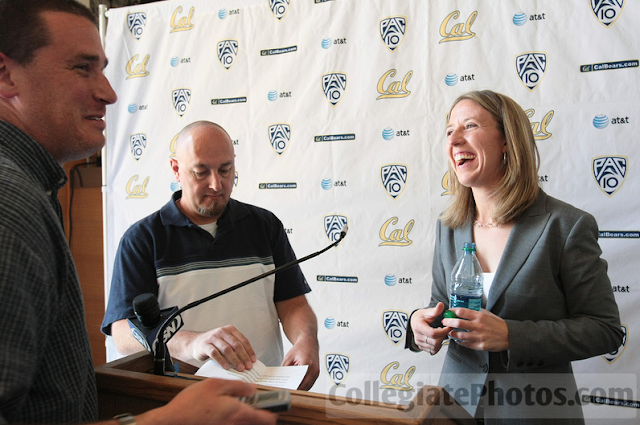 And whoa, Sandy Barbour ASKED me to take a picture of her with Mike Silver. This never happens, very exciting!! 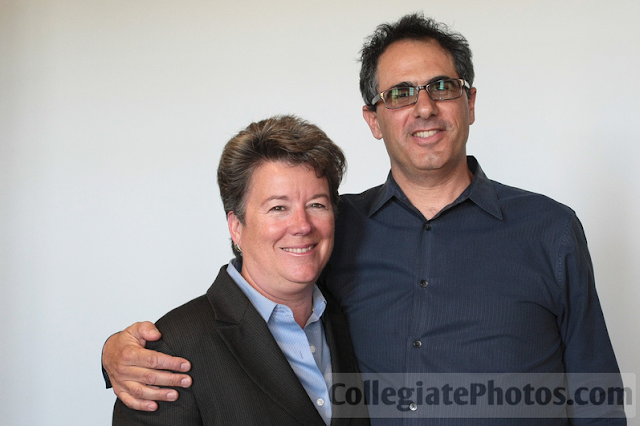 Then it was to the goodie closet. Some girls dream about a closet full of Versace dresses and Manolo Blanik footwear, and that "some girls" includes me. But on a more practical level, what I would actually wear everyday, OMG a closet full of Cal gear! 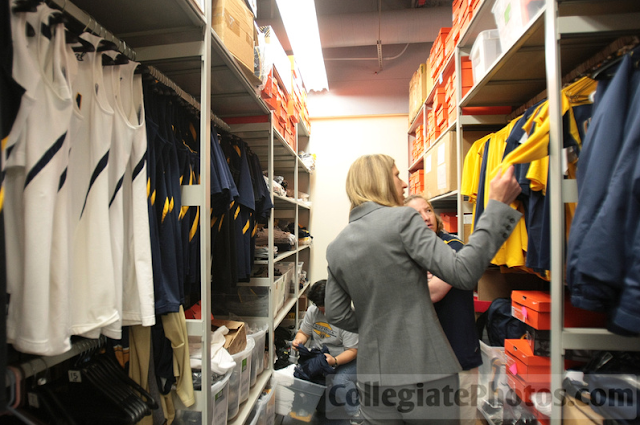 Though I can't say I'd want EVERYTHING in this closet. 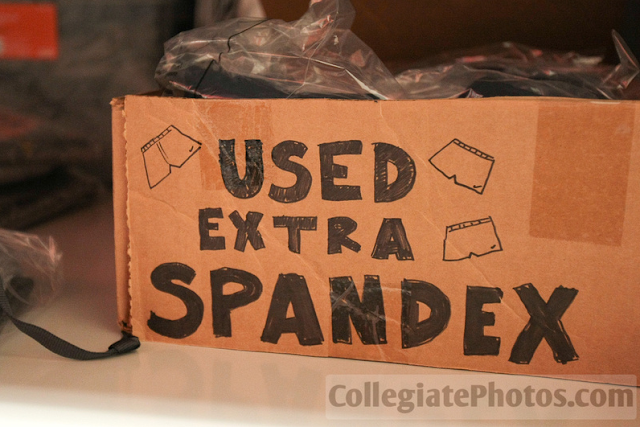 Then I went home to grab some dinner and send off a photo from the press conference for calbears.com before heading over to Pyramid where the senior banquet was being held. We had to be in SF by 7:30 and I'm sure Lindsay would have much preferred to go to her hotel and lay down for a second but she wanted to stop by this team dinner to connect with the girls... that she won't even be coaching. I think that says a lot about her character. 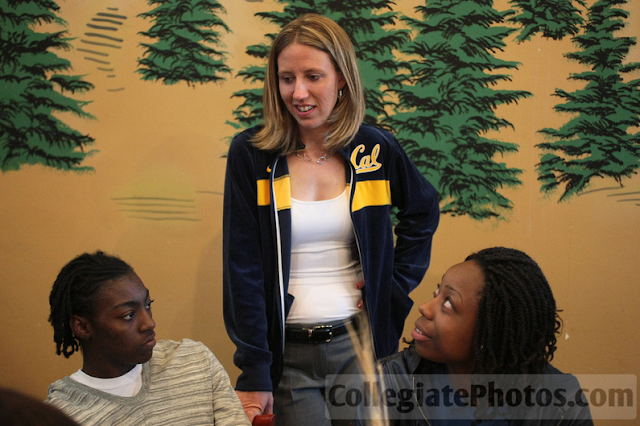 Then we drove over to the Comcast Sportnet studio for her appearance on Chronicle Live. It was an hour plus delayed because the Giants game was delayed, but we killed time at a nearby restaurant. Even though she's stepping into this celebrity status role where she's on a TV set where a professional make up artist does EVERYONE'S make up before they go on, she wasn't a diva ;-) Shout out to make up artist Linda who made everyone look beautiful... in HD! 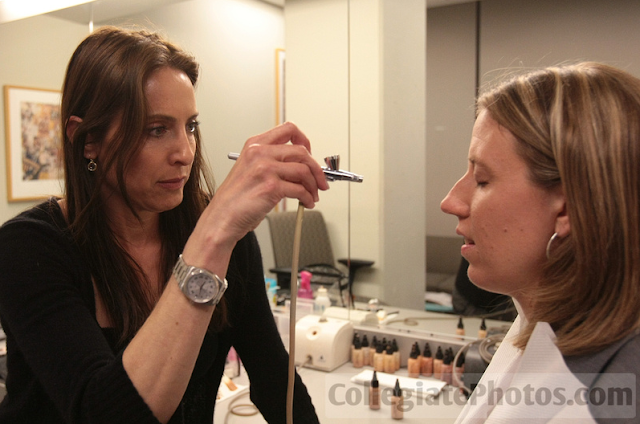 Lindsay had a great interview with Greg Papas, who is an amazing multi-tasker, literally having a conversation with Lindsay, while reading the teleprompter and hearing score updates of the Sharks game in his earpiece. 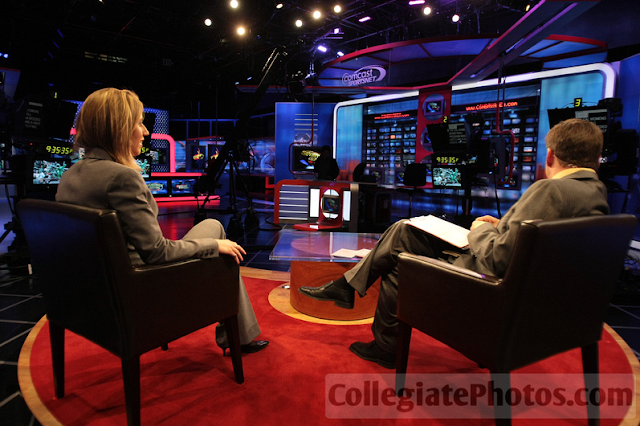 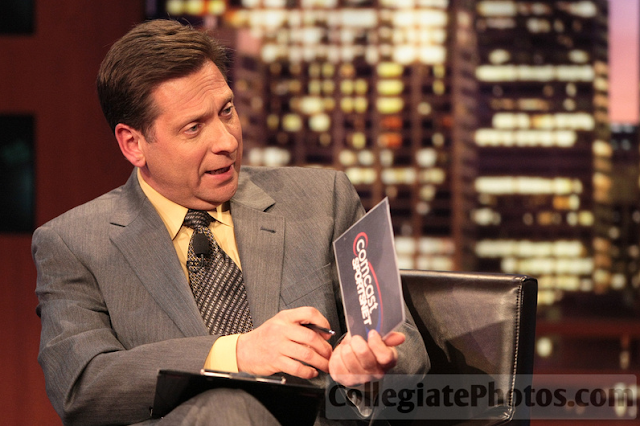 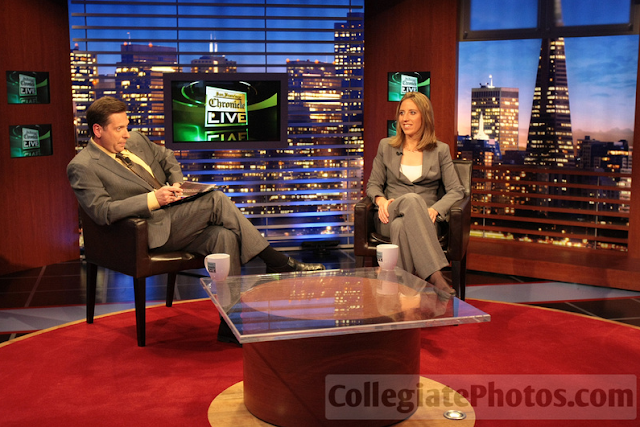 A fun day for me, I'm so excited for this new era in Cal Women's Basketball and look forward to covering her throughout her process of taking on this new position with care and dedication! Welcome to Cal, Coach Lindsay Gottlieb!! =)  Go Bears!!
at April 26, 2011
Labels: Basketball, Cal Bears, Collegiate Photos, Women's, Womens